I get approximately 4000 hits per day on this blog, and I don't doubt that some of my traffic is probably coming from people who are under the legal drinking age.

Now that Damian, Isaak, Toni, Chris, Seth, Leah, Cody, Calliope and other trans teens in the Class of 2013 that didn't make the news are headed to their post high school lives, time for me to aim a post at the trans members of the class of 2014.

Congratulations in advance Class of 2014!    When school starts this fall you will be at the top of the high school societal food chain.  I know you've been impatiently waiting for the last two or three years to say the words 'I'm a senior" and couldn't wait for the Class of 2013 to leave so y'all can begin your long awaited time of running thangs in your various high schools and look down your noses at the incoming freshmen and sophomores.

The start of the fall semester of your senior year is what you, your parents, grandparents and other extended family members have waited for since that first day they tearfully dropped you off for your first day in kindergarten.

You high school juniors (and high school freshmen and sophomores) probably noted as much as your trans elders did some of the drama the persons I mentioned went through to be their authentic selves on one of the signature days of your young lives.

What this post is ultimately getting at is the TransGriot and your trans elders want you to not only savor every delicious moment of your final year of high school in 2013-14, but being you as you do get that education and prepare for the next phase of your lives.

Seeing that makes us realize that all the struggles we undergo to ensure that the laws and policies are in place for you to thrive wasn't in vain and you're benefiting from it. 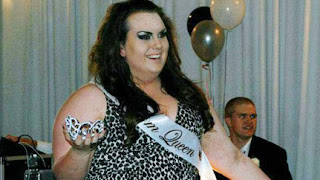 Some of you transteens are increasingly getting to attend school in districts that have adopted anti-discrimination policies that cover trans kids, while other districts aren't thinking about it.

But don't let it stop you trans teens if you're thinking about running for homecoming king or queen, prom king or queen, class president, or play your favorite sport.  There are federal laws and positive court cases already on the books that allow you to live your trans lives no matter what part of the country you live in.

There will be those haters uncomfortable in their own skin or with their gender identity who will oppose you.   Some of them will be your fellow students, some will be their parents, and some will be people in the school  administration.

But go for it!   Be you.  Live your trans lives.  Some of you are fortunate enough to live in states where trans human rights are covered.  Even if you aren't in one of those 16 states (and hopefully 17 if Delaware joins the trans human rights party) the federal law is on your side.

So is an entire trans community in your various states and in some cases around the world ready and willing to help you and get the word out even in deepest darkest red state America.   You may even make a little history in the process since as of yet we have never had to my knowledge an out transperson become a homecoming queen, prom king or high school class president.

I have no doubts that it will happen in my lifetime because of the transkids and transteens now winding their way through their school years at the elementary and middle school level or who are increasingly transitioning in high school.

Your trans elders are fighting to help make this a better world for you when you leave high school so that all you have to do is dream those big dreams and go out and fight to achieve them.

Trans Class of 2014, I hope and pray you have a wonderful and less drama filled senior year than the Trans Class of 2013 just had.
.
So word to the wise trans younglings, get your game plan together now so you have a relatively stress free senior year. GLSEN, the ACLU, PFLAG and your local TBLG orgs can play major roles in helping ensure that happens if you run into any transphobic resistance.

But based on what happened in 2013 and previous school years over the life of this blog, I'm betting I'll be writing a few posts during the 2013-14 school year chronicling your attempts to fight the power, express your trans selves and live your lives.

I hope and pray that some of those posts I get to write will also be ones in which you make trans history and I'm chronicling you doing things that your trans elders only wished we'd had the opportunity to do during our high school days.
Posted by Monica Roberts at 8:00 AM