It's the first day of summer in the Northern Hemisphere (Winter for my readers south of the Equator.) and it's the longest day of the year for us.   From now until September, especially in Houston the temperature and the humidity percentages will be battling to see which one goes higher.

The classic summer anthems like Jazzy Jeff and Fresh Prince's 'Summertime', Sly and the Family Stone's 'Hot Fun In The Summertime', WAR's 'Summer'  are getting more frequent airplay and triggering memories as you hop in the car and drive or fly to family reunions around the country or just cruise to the local park with your windows down and the he volume of your car stereo up. 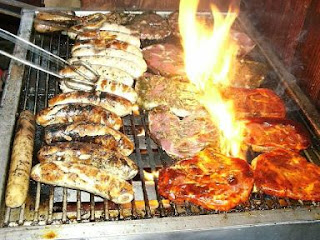 And you savor the smell of roasting mesquite flavored burgers, brisket, ribs, pork chops and sausage permeate the air either in your neighborhoods or in the local parks.

We interrupt these pleasant summertime thoughts to introduce something foul smelling in the air, stupidity and ignorance.

Sorry I had to do that, but I must do my solemn Friday duty and get on with the TransGriot 'bidness' of selecting this week's Shut Up Fool Award winner.

Y'all know that's what y'all surfed over here to check out at noon CDT anyway, so don't even front.

Ahem, and now, it time to shine our spotlight on this week's group of fools.

Honorable Mention Number One this week is Jim Allen, the head of the Montgomery County, IL Republican Party.  He put his misogynist white hood on as he aimed a racist e-mail at former Miss America 2003 Erika Harold, who is running for Congress in 2014 as a Republican.

Way to do that minority outreach, Jim.

Honorable Mention Number two goes to Catherine 'Bug' Brennan,  who got (snicker, snicker) tossed out of the Royal Vauxhall Tavern in London and tried to pimp it as an example of 'anti-lesbian hate'.

Naw Bug, tell the entire story.  They kicked her butt to the curb because she's an internationally renowned trans oppressor and she tried to enter that pub on the very night they were doing a popular trans themed night called Bar Wotever.  Lesibilicious also chimed in on this and basically summed it up in the title of their post.


'If you’re going to trash trans people online, don’t be surprised when they kick you out of their club.'
Got that right.  The Bug can continue to cry her White Women's Tears outside and in TERF world.

Honorable mention number three goes to Rep. Jeff Duncan (Teabagger-SC) who is calling for another invesitgation of the POTUS on ho hum, the birther issue

This week's SUF winner is Paula Deen, who was revealed to be on Juneteenth no less to be cooking up something other than tasty Southern dishes.  Deen was revealed in a May 17 deposition in response to a discrimination lawsuit filed by the former general mamager of hr Savanna, GA restaurant to be a Confederate flag waving bigot and Black Twitter wasted no time putting its collective foot in her antebellum loving behind with two Twitter hashtags that went viral after the news broke.