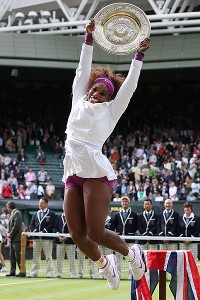 Break out the strawberries and cream, The Championships or as I call them,'Williams'-don start today and run through July 7.

Let me get the bad news out of the way now.   Venus withdrew because of recurring bask spasms, so that means that not only will Big Sis not be there for the first time since 1996, they won't be able to defend their 2012 doubles title.

That leaves Serena to uphold Williams family honor and their tradition of beating down all comers in the women's tennis world at the All England Lawn Tennis and Croquet Club.

Where the French Open and its clay courts have been a house of horrors for them, Wimbledon and its grass courts have been the mirror opposite. The All England Lawn Tennis and Croquet Club has been the  Williams sisters personal tennis playground to the point that 10 of the last 13 Wimbledon singles crowns have been won by either Venus or Serena in addition to five doubles titles and the single and doubles gold medals at the 2012 London Olympics.

Serena comes into this tournament as the defending singles champion, the number one ranked player in the world, the number one seed and fresh off a dominating performance across the channel in Paris.

She starts her quest for her 17th career single titles and sixth Wimbledon title with a first round match against Mandy Minella of Luxembourg.

Considering the way she's been playing lately, I wouldn't bet against Serena holding up another Venus (Williams) Rosewater Dish at the conclusion of this tennis fortnight.