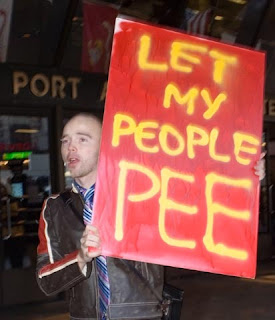 For my trans brothers and sisters who live in or are traveling through or into the state of Arizona for business or pleasure, you'll be happy to know that the act of pooping our pissing in the gender correct bathroom will not make you a criminal in the state.

The unjust bathroom bill that GOP oppressor Rep. Jon Kavanagh filed that originally called for making it a Class 1 misdemeanor offense punishable by six months in jail and a $2,500 fine to use a public toilet, bathroom, shower, bath, dressing room or changing room associated with a gender other than what is on one's birth certificate has died for this session.

After a wave of international outrage, negative publicity and pushback from Arizona trans residents and the national trans community, Kavanagh modified his original draconian bill to shield businesses from civil or criminal liability if they ban people from restrooms that don’t match their birth gender.

According to Kavanagh there's concern in the GOP caucus about the unjust bill's definitions, so it will have to be shelved until next year.

Here's a suggestion Jon.  How about you drop the idea period and save you, your party and the state of Arizona further embarrassment and get thee to a psychologist to deal with that deep seated hatred you have for trans people?