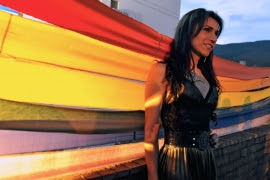 While South American nations have made outstanding progress on trans issues over the last few years and leaders are emerging like Venezuela's Tamara Adrian who are garnering international recognition, looks like the international trans community will have to wait a little longer before we see a trans legislator elected on the South American continent.

Colombia's Shelcy Sanchez attempted to make that giant electoral leap for transkind back in 2010 when she became the first open transperson on the South American continent and first in her nation to run for a seat in their national legislature but was unsuccessful in her Colombian House of Representatives race. 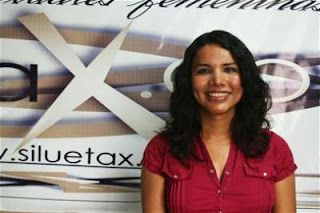 Back in February 30 year old Diane Rodriguez became the first out transperson in Ecuador to run for a seat in her nation's national legislature.

The election was held on February 17 and unfortunately the psychology student came up short in her history making run as a member of the leftist Ruptura 25 party for a seat in Ecuador's National Assembly.

Verbal was also making history as the first open trans candidate in Chile.  She was running for the seat in Chile's national legislature representing northern Santiago’s Recoleta-Independencia district as a member of a center-right political party with a campaign message focused on achieving equality rather than her district’s specific needs.

Chile's parliamentary election isn't until November, but unfortunately Verbal announced she is dropping out as a candidate for a reason that is painfully familiar to trans people world wide:  documentation issues.

Verbal ran for office having applied for a legal name change that isn't official yet.   She is a well known activist in the country and active in her party but was told by Chilean election officials she either had to run for her seat with her old male name on the ballot or pull out of the race.


“I thought, perhaps naively, that given the vacuum of electoral laws, and filling in that space with the anti-discrimination law, there wouldn’t be trouble getting what I asked,” Verbal said.

The reason Verbal pulled out is she felt that having been in Chilean politics for  several years and risen to prominence as Valentina Verbal, voters wouldn’t recognize her old male birth name on the ballot and connect it with the person she is now and the campaign would be a wash.

While she may have been sidelined for this election cycle by the name change issue, Verbal said, "I’m sure of one thing: I will continue in politics.”

Verbal also said something that I and a lot of folks have made the case for here in the States and on this blog in terms of having more trans people get involved in electoral politics and running for office at all governmental levels.

“In order to get strong social changes, it’s necessary to make them from a position of power, in particular from Parliament. Because Chile is a very legalistic country, it’s important to have laws to provoke these changes.”


While the first South American, first in the Western Hemisphere and fourth trans person worldwide elected to their national legislature won't happen in this election cycle unless there's somebody running I'm not aware of yet,  it's only a matter of time before it does.