GENDA Stalled In NY Senate Again-What's Up With That? 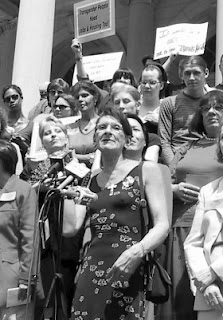 And as residents of the state where Sylvia Rivera spent her life up to and including her deathbed working for trans rights, it's past time for y'all to start channeling her fighting spirit and kick azz tough minded determination to pass the civil rights coverage that our community needs."--TransGriot June 27, 2011 What Are Y'all Gonna Do New York Trans Community?

New York trans community, I know you won't rest (and shouldn't) until GENDA becomes law but y'all should be taking it as an insult that a statewide trans rights bill introduced on May 31 in Delaware is halfway to passage and becoming law in that state.

Meanwhile you peeps that reside in the state where the Stonewall Rebellion was kicked off by Ms Rivera in 1969 are once again facing the fact it has been eleven years since human rights coverage for gay New Yorkers was passed by throwing you under the civil rights bus to get it and thirteen years since the non trans inclusive New York hate crimes law passed in 2000.

The what would have been 62nd birthday of Sylvia Rivera is approaching on July 2.  What would Sylvia be doing in this situation if she was still here in this plane of existence?   Raising hell about it until GENDA passed and had Gov. Cuomo's signature on it.

How about setting a goal of having that done by her birthday?

New York trans community, y'all need to get pissed off and channel your inner Sylvia Rivera.  You not only need to start demanding ASAP the New York Senate bring GENDA out of committee and to the Senate floor for a vote,  but respectfully demand that the governor you helped elect spend some of his political capital pushing for GENDA's passage so he can sign it into law as he claims he would do if that happens.

Here's the phone number of his Albany office to get you started on the road to being agents of your own trans liberation: 518-474-8390 and making Sylvia smile.

That's a nice opportunity for me to segue into focusing on Gov. Andrew Cuomo.   Here's a Democratic governor who loudly proclaimed as he was signing the marriage equality bill into law after it passed in June 2011 that "New York at its finest has always been a beacon of social justice.”

It seems he has amnesia about the fact that same New York social justice has eluded its transgender  residents.  I also must remind folks of those shame inducing moments in 2000 and 2002 when my transpeople were deliberately excluded from New York's social justice when they were cut out of the hate crimes bill and SONDA.

It also is quite interesting to note that Gov. Cuomo, who couldn't shut up about marriage equality in 2011 and was tirelessly drumming up support to pass it, is cricket chirping silent about equality when it applies to trans New Yorkers.

And don't forget Governor Cuomo, it's not just trans New Yorkers who are watching you as a GENDA bill that has passed your state Assembly now six times continues to languish in the New York Senate.  We compare and contrast your inaction on this bill of vital importance to the trans community and our allies to the active and vocal 2011 role you took in passing marriage equality.

Your inaction and silence on GENDA is being noticed not only by trans New Yorkers, but our allies inside and outside the state.  This Change.org petition is evidence of that.

If you think I'm kidding about that, did you get an invite to President Hillary Clinton's inauguration in 2008 or 2012?   We may not have as much money as the gay community does and the anti-trans discrimination we face plays a large role in that GENDA would address, but we did manage to donate over $13K to the 2008 Obama campaign.   What we don't have in cash we make up for with votes and people power for campaigns. 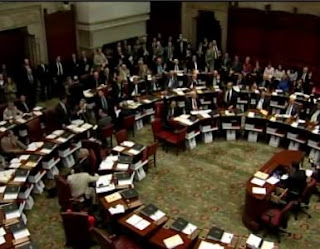 16 states, with Delaware on its way to becoming the 17th to do so have laws on the books to protect the human rights of their trans citizens.

New York has the chance to join that list and no, signing a continuation of Governor David Paterson’s executive order barring discrimination against transgender employees of NY state is not enough.

The transpeople who don't work for the state need the legal protection that GENDA will provide, and the only thing stopping you from becoming known as a state that values its trans citizens is the New York Senate

You also said at the time you signed the marriage equality bill, "The other states look to New York for the. progressive direction. What we said today is, you look to New York once again. New York made a powerful statement, not just for the people of New York, but for people all across this nation.”

And we need you Gov. Cuomo to make that powerful statement once again not only for trans New Yorkers, but the nation as well.
.
Posted by Monica Roberts at 6:00 AM