Congrats on DOMA and Prop 8 Being Overturned...But

I don't feel much like celebrating when my human rights went backwards yesterday no thanks to another narrow 5-4 Supreme Court decision.

When the conservafool dominated SCOTUS fracked with the Voting Rights Act Section 4 yesterday, it was akin to a punch to the gut

It was even more infuriating because a Oreo cookie chomping knee-grow sellout cast the deciding vote to help disenfranchise his own people.

I know civil rights is not a zero sum game, but that's the way it looks to a lot of African-Americans today inside and outside the trans and SGL community. One group got their rights advanced while the centuries old historical pattern of crapping on the human rights of African-Americans made a comeback.
The bitter irony in all of this is the SCOTUS VRA ruling was aided and abetted by a self hating Oreo cookie chomping knee-grow sellout who isn't fit to shine the shoes of the great justice Thurgood Marshall, much less follow him onto the Supreme Court.

An additional bitter irony to SGL and trans peeps is that the same Justice Anthony Kennedy, who is being loudly praised in non person of color GL circles today for his marriage equality rulings is the same one who sided with the majority to roll back our human rights.

It also takes place in a Supreme Court in which the Chief Justice of it made his reputation and his fortune working to kill the Voting Rights Act.

And I'm not the only African-American member of the SGL and trans community who doesn't really feel like celebrating today.   Take it away Jasmyne Cannick:

The white gay community has been banging its head against the glass ceiling of a room called equality, believing that a breakthrough on marriage will bestow on them parity with heterosexuals--because in all other areas including employment, home-ownership, wealth, healthcare, education, etc. one could argue that they are already equal in terms of access. Well congratulations, on today's rulings, you are that much closer to being equal with your white counterparts.

And while Black same-gender loving couples may benefit from today's rulings, I would be remissed if I didn't say that the right to marry does nothing to address our access to employment, home-ownership, wealth, healthcare, education, etc. and so for many of us the fight continues because being able to get married is half the battle, the other half, is being able to have a home to live in, a job to provide for your family, access to affordable healthcare to share with your family, and access to the type of education to make all of the above happen.


Not to mention our voting rights are now exposed to once again being suppressed and rolled back by the neo-Confederate Republicans who are hellbent on taking our human rights back to 18th century levels.

And some of you GLB folks enable that oppression by voting for them as 'proud conservatives'. 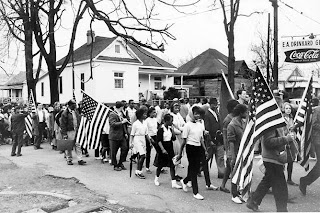 I can't forget that and the four century tortured history as an African descended American as you GLB folks are giddily hailing a major civil rights win.

It's also a wakeup call for this generation of kids and their elders not paying attention to the news cycle.  We just got the reminder yesterday by the Supreme Court that for African-Americans, we never have the luxury of presuming that our human rights are secure because they are always under attack.

And Republicans and the conservative movement are all too willing to engage in rolling them back.

So congratulations GLB community for your hard fought marriage win.  But I won't be at the party raising appletini toasts with you.
Posted by Monica Roberts at 12:00 PM