Black Pride: What Does LGBT Pride Mean To You 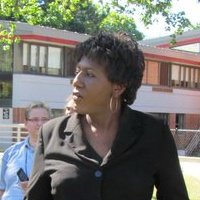 TransGriot Note:  I was honored to be asked by Kellee Terrell along with other African-American TBLG folks as part of an EBONY.com feature story to say in 60 words or less what does TBLG pride mean to us?


June is LGBT Pride Month and we reached out to Black LGBT folks and asked, “What does pride mean to you?” Here is a taste of the inspiring and amazing things they had to say.—Kellee Terrell

“Pride reminds me I'm also part of and heir to a legacy of struggle for the human rights of transgender people that was kicked off one night in June 1969 by Sylvia Rivera and Marsha P Johnson.  And the struggle for trans human rights continues today.  It's even more important it be recognized by fellow African Americans in the face of the anti-trans violence and discrimination disproportionately aimed at us.”

Check out what the rest of my trans, bi and SGL peeps had to say about pride here.
Posted by Monica Roberts at 9:30 AM