Time's Running Out In NY State To Pass GENDA

While the trans community in Delaware woke up to the first day of having their human rights respected and protected, the trans citizens of New York woke up to a different reality.

They find themselves once again in the same frustrating situation of seeing GENDA pass their Assembly for the sixth straight time on an 84-46 vote back in April, but languish in the GOP controlled NY state Senate with the session ending for summer break at midnight EDT tonight .

What's pissing off trans people in the state, their trans community allies across the nation and the world who are also watching this play out is Gov. Andrew Cuomo's (D) cricket chirping silence about GENDA being stalled in the GOP-controlled Senate as trans New Yorkers watch a trans rights law be introduced May 31 in Delaware and become law and a Canadian federal trans rights one get tantalizingly closer to becoming law there. 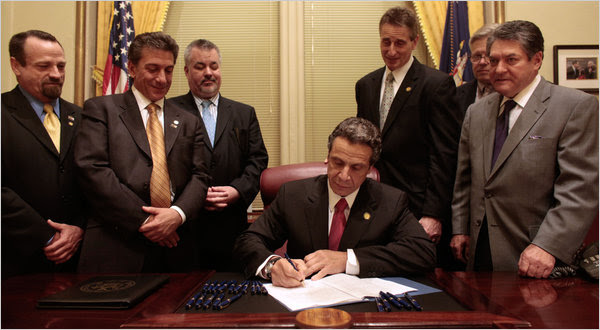 Governor Cuomo, just a reminder that you claimed when you signed the marriage equality law in 2011 that New York was a beacon of social justice.

I would submit that based on the treatment GENDA's been getting.your claim that New York is a beacon of social justice is specious when it comes to the human rights of trans New Yorkers and your record to this point is spotty on that.

I'd also like to remind you Governor Cuomo that transpeople do vote not only in New York but elsewhere around the country.  If you are considering running for president in 2016 or 2020, we do have some influence on that presidential primary process and the national trans community will use GENDA as a litmus test to judge you on your leadership skills.

We are also noting the vastly different reactions concerning what you did to pass gay marriage in 2011 versus what you're NOT doing to advance the human rights of transgender New Yorkers that have waited far too long for them after being cut out of SONDA in 2002.

New York Senate, it's past time for you to stop being the trans human rights oppressors you appear to the world to be and bring GENDA to a vote.

You claim New York is a beacon of social justice. It's past time for you to prove it and become the 18th state to pass trans human rights coverage for a community that has been waiting far too long for it.