Transpass Is Still A Trans Problem In Philly 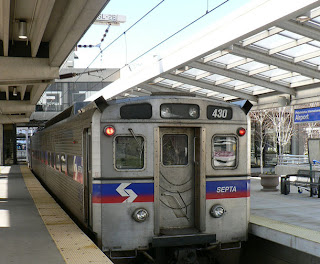 When I had the honor and pleasure of speaking on the Bryn Mawr campus back in October 2009 I took a SEPTA train from the airport to downtown Philly and kicked it with Dionne Stallworth for a few hours before heading to the campus.

After finishing my speech and spending some quality time afterwards with my Bryn Mawr hosts I rode the  train back to the airport to catch my flight back to Da Ville with no fuss, no muss and no problems short of falling asleep on the train and riding past my stop on the way to Bryn Mawr.

I also had a SEPTA day pass to do it with.

But for transpeeps in the Philadelphia area, they are still locking horns with SEPTA over their policy of putting 'M' or 'F' stickers on monthly transit passes in order to stem the tide the transit agency claims of $4.9 million in annual revenue losses from people allegedly sharing passes.    But opponents and even SEPTA admits there is no way of determining if the alleged fraud is actually occurring, much less have any way of tracking it. 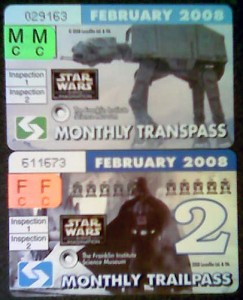 The sticker system that was put in place to combat it has led to gender policing by SEPTA personnel and Philadelphia area transpeople such as Charlene Arcila being affected by it.

Four years ago Charlene was prevented by a SEPTA driver from using a weekly Transpass because of a gender sticker that didn't match her presentation.

She has used tokens ever since that incident and filed a complaint against SEPTA with the Philadelphia Human Rights Commission.   Because SEPTA is considered a quasi state agency and not subject to local regulations, the complaint hasn't been heard

In addition, when you ask the PHRC about it, all you get is either a 'no comment' or 'they can't discuss pending cases'.

The sticker system doesn't do what SEPTA officials claim it's supposed to do because the agency's antiquated fare collection system is only capable of tracking how often a card is used.   It doesn't track the gender of its user, or whether the card is being shared by same gender riders as the agency alleges.

In the meantime, the SEPTA gender policing issue hasn't gone away in Philadelphia.   It not only has a deleterious effect on trans patrons of the system, but affects cis people who have ambiguous gender presentations as well.   It's not only humiliating to the person who gets questioned, but could put them in a situation in which they could face abuse or bodily harm.


Philadelphia Councilman Bill Greenlee is among those voices who question the need for SEPTA gender policing. “It just seems to me it’s causing problems for people I’m sure are already having enough problems,” he said. “Unless they can really show or prove they’d lose [millions of dollars], why do this?”

SEPTA Chief Financial Officer Richard Burnfield stated, “I look at it as one of the tools that is in our toolbox to help the authority prevent fraud and misuse of our passes.” . 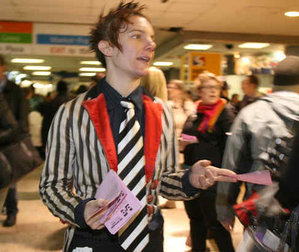 SEPTA also keeps pointing out the problem will go away when they implement their new smart card system in three years, but that's not good enough for Arcila or transpeople in the area who continue to protest and speak out about the issue.

"I feel like they’re trying to sweep it under the rug,” Arcila said. “Once they put the smart card [system] into effect that would close the door on this case.”

A photo ID pass would have done the trick if they were serious about stopping the sharing of SEPTA passes. Since the smart card system is still three years from implementation, that's a moot point now.

The gender policing problem will persist until SEPTA shows some leadership and stops it.
But unfortunately  until they do, you'll have some SEPTA employees implementing and enforcing the policy in ways that will be problematic in people's lives.