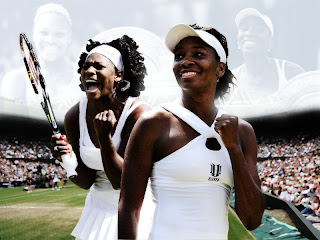 Can I call it or what?    When I penned my last Williams watch post concerning the French Open  I had this to say about the prospects of seeing my favorite tennis playing siblings take the court this season:

'If I had to guess when the Williams sisters plan on making their return to the tennis world, I'd circle June 20 on the calendar.    That's the starting date for their favorite Grand Slam tournament, 'Williams'-don'.    TransGriot   May 17, 2011


Read it and weep tennis world.  Playtime in the women's tennis world is over.  Break out the strawberries and cream, Serena and Venus are coming back..

Serena hasn't played since stepping on glass at a Munich restaurant four days after winning the 2010 'Williams'-don tournament and slicing two tendons in her foot.   She underwent two surgeries on that foot, and then was hospitalized in February for a hematoma in her stomach an a pulmonary embolism.

Her ranking has slid to number 25 in the world since then, but knowing her it won't take her long to get back into the Top Ten.  .

Venus hasn't played since injuring her hip during the 2011 Australian Open, but is on track to play at Wimbledon as well.

I call The Championships 'Williams-don because out of all the Grand Slam tournaments, this is the one they have throughly dominated.   They have won nine of the last eleven singles titles and played each other four times for the Venus (Williams) Rosewater Dish.


They are set to play the Eastbourne grass court tournament that precedes the start of Wimbledon, which begins on June 20-July 3.