2011 Williams Watch-Big Sis And Little Sis Are Out 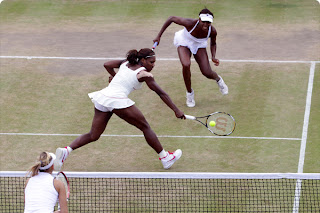 The Williams haters are rejoicing right now because neither Big Sis or Little Sis will be around for the quarterfinal round of Wimbledon..

For the first time at the All England Lawn Tennis and Croquet Club since 2006, someone with a last name other than Williams will take the Wimbledon Ladies singles title.

The back to back champ Serena was upset by France's Marion Bartoli earlier today 3-6, 6-7 (6-8) in straight sets.  Several hours later five time 'Williams'-don champ Venus was knocked out of the tournament by the same person who did so last year, Bulgaria's Tvetsana Pironkova in straight sets.

Pironkova also beat Big Sis by the same 2-6 3-6 score she posted on her last year.

I really wanted my girls to make it this year considering all the drama they've faced, and I wanted it badly for Little Sis, who faced life threatening surgery earlier this year.   Considering they made it to the fourth round and hadn't played a lot of tennis prior to this tournament is a scary thought and bodes well for the next major, the US Open in a September.

You Williams haters in the tennis world can laugh, exhale and have a good time partying like it's 2006.

But they'll be back.  And remember, the venue for the 2012 Olympic tennis tournament is the All England lawn tennis and Croquet Club.