Dave Campbell's Texas Football Is Out 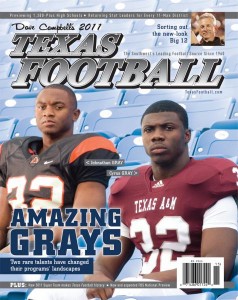 One of the iconic signs that fall will soon be upon us in the Lone Star State is Dave Campbell's Texas Football magazine hitting the newsstands.

It has been published since 1960 and is considered the football bible in this state.  I've been a regular reader of it since 1978 and it includes in addition to the feature article on the cover boys, in depth coverage of all aspects of football in the state from high school to the colleges.  It even included features on our two NFL franchises, the Texans and Cowchips.

On the high school level it covers all the classifications and teams in them from Six-Man to Class 5A and the private schools.  It also compiles a preseason high school Top Ten for each conference.

It not only covers all the college teams in the state, it predicts their records for the upcoming season.   The DCTF staff is predicting UH will go 11-1 probably because Case Keenum is back for a medical redshirt season, so we'll see.if that comes to pass.


Now if we can get the NFL lockout ended, everything will be alright for us Lone Star football fans.