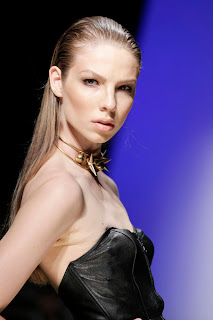 Lea T. may be getting all the hype for being a trans model, but there may be another one on the horizon in the person of Valentijn de Hingh.

If you don't know who she is, here's a link to the video Vogue magazine shot about her to get you started.

There's also another interesting part about her story besides the trans angle.  From age 8 to age 17 she was featured in a Dutch documentary about her life that was broadcast in 2007.

Not long after that the 1.80 meter tall teen (5' 9") was signed to a contract with an Amsterdam based agency and walked the runways in Paris.   But when she kept growing to 1.86 (6 feet) meters, she was deemed too tall for a modeling career.

With the fashion world buzzing over Lea T and androgynous model Andrej Pejic, the time seemed right for the University of Amsterdam student to consider a relaunch of her own career after working at an Amsterdam agency as an assistant booker.

After flying to New York and doing two well received photo shoots, interest in her has picked up again and she is getting a lot of magazine work.

May want to keep an eye on her and see if Valentijn de Hingh takes it to the next level.