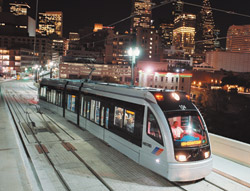 While I was a Texan in exile I paid close attention to the light rail developments going on here in H-Town.   I was happy to hear that METRO built the initial 7.5 mile (11 km) segment of light rail from UH-Downtown to just past Reliant Stadium.

It has been an unqualified and popular success to the point in 2003 Houstonians voted to expand the system and add another 30 miles of track to it.

It has been so successful that METRORail reached the 75 million boardings milestone four years ahead of projections and thanks to a deal with Utah's transit authority is getting 19 new Siemens rail cars scheduled for delivery in December 2012. 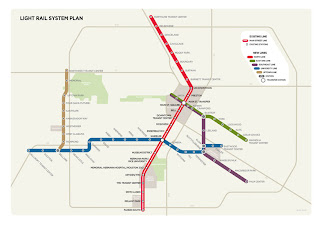 After experiencing the convenience of riding the rail systems of other cities in various parts of the country I've visited, I have long believed that Houston needs a rail component to its mass transit system that includes commuter rail.  I lamented the fact that my hometown hasn't had it included in its regional transportation plan to this point because of GOP led resistance.

The cool thing is the thinking has shifted on rail to the point even local Republicans have helped fight for Houston's share of federal transit dollars to help pay for it.   As those gas prices keep climbing rail is not only a more efficient way to move people around, it becomes more of an attractive option to people who are living in the Houston area's sprawled out exurbs, inside the beltway and Loop 610. 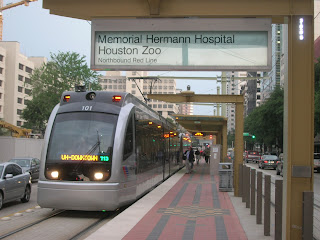 Since I've been back home, I've had the opportunity to ride the METRORail Red Line train up and down its entire length from the UH Downtown Station to the Fannin South one on the other end of the line.   I was pleased to discover that the 6.1 mile (10 km) Southeast or Purple Line when its completed in October 2013 (or 2014) is going to terminate just a few blocks from where I live now.    There are plans to eventually extend that line to Hobby Airport.   At the current Fannin South terminus of the Red Line the debate is whether to extend the light rail line to Fort Bend County or tie in a commuter rail line running from there to the Fannin South station.  .

But before we get to the point of me being able to ride the train to downtown, Minute Maid Park, the new Dynamo Stadium under construction.or past the University of Houston and Texas Southern University campuses I'll have to suffer with a few years of construction.. 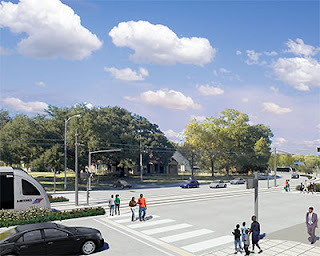 The utility construction and widening of Martin Luther King Blvd is well underway and its started at the intersection of MLK and Griggs Rd where the line will make its turn before it heads into the Palm Center terminus station.   There's a brand new YMCA on that corner now, and once the line is completed we hope to see new businesses pop up along the rail line similar to what happened when the Red Line was completed.

The construction has also picked up near the University of Houston section of the line along Wheeler Street.  At MLK and OST by MacGregor Park there was a gas station that has been torn down, the underground fuel storage tanks removed and land cleared.   MLK is being widened and new utility lines installed with the same thing happening on sections of Scott Street.

The good thing about being down here is that they can pretty much work year round in order to get it done.  How soon they accomplish it is the question.