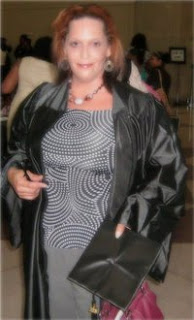 In what was a major shock to me, I was informed that Tracy Bumpus, a longtime activist in the New York area and plaintiff in the successful Bumpus v New York Transit Authority case has passed away.

I was getting to know my 45 year old 'baby sister' as I jokingly called her.

She was originally from Oklahoma and we were part of that successful effort that helped kill the unjust MD bill.  She was working on completing her master's degree in social policy and was days from doing so from Empire State College while working as a program assistant at the AIDS Project of East Bay.

She had already signed up for a second master’s program for teaching and formerly was a life skills trainer and coach for Housing Works Transgender Transitional Housing Program.   She's had some challenges, but she rose above them to become a respected trans rights warrior

Shockingly, now she's gone.    Tracy was living in Vallejo, CA when she passed away, but the people who loved her extend from the Left Coast all the way back to New York.

Fittingly there will be two memorial services on both coasts.   One will be held for her in New York and the other in Oakland.


The one for Tracy in Oakland will take place this Thursday at the First Unitarian Church of Oakland (685 14th Street) beginning at 6:00 PM PDT.

The New York one is supposedly taking place on Thursday as well, and when I get the info I'll pass it along in a post as soon as I get confirmation of location and time

Rest in peace Tracy, you will be missed.