Last year I wrote about the controversial efforts of HISD Superintendent Dr. Terry Grier to close my high school alma mater that was thwarted by a coalition of people that included moi.

We bought ourselves some time after last year's unanimous 8-0 HISD board meeting vote to table it, but like Jason, the proposal being pushed by Grier to close Jones isn't dead yet.

This time the proposal was to close Jones and send the students to Worthing and Sterling.   That proposal got the same thumbs down at the February 11 community meeting held on JJ's campus as the Jones-Sterling merger got  last year and I said as much during that meeting that was attended by a multicultural crowd of  over 100 people.

Read my lips and this post HISD school board.   The students, teachers and the South Park community want Jesse H. Jones High School to stay open.  Most importantly we want HISD to fix the mess that was created when the Vanguard magnet program was shadily stripped off the campus back in 2002 and time to come up with alternatives to boost enrollment.

Marketing the school to the growing South Park Latino population would be another one.  Creating programs and activities that would appeal to the neighborhood kids whose talents gravitate to things other than the STEM program along with bringing Vanguard back home by creating another VG high school program on that campus.  .

If it weren't for the removal of the Vanguard program and its subsequent housing on a separate campus now relocated to the Montrose area,  Jones would have an enrollment of 1030 students and I wouldn't even be writing this post.   It would help if we had stability in JJ's principal's office along with HISD ceasing and desisting with the yearly threats to close JJ. That would be a great start toward boosting its enrollment because some of the transfers out of the Jones attendance zone are driven by that. 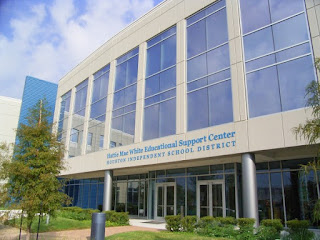 I had the pleasure at that February 11 meeting of talking to the current Falcons who were excited and happy to know that they weren't alone in this fight and alums were in the JJ house to help them in this battle to keep Jesse H. Jones High School open.


HISD is still peddling the same snake oil they were trying to sell the community last year to justify the closure.  Low enrollment, high transfer rate out of the Jones attendance zone, high budget cost per student and changing neighborhood demographics that were all debunked in this March 5 Houston Forward Times article.

Performance has not been a factor with the closures.   Some of the 19 schools that were closed, like Rhoads Elementary were exemplary ranked schools.   Dodson Elementary, which has the highly successful HISD Montessori program on its campus that my sister attended, is also slated for closure Thursday and sits along I-45 in the EaDo shadow of downtown Houston mere blocks from the Purple Line light rail line being built.

The African-American community is still pissed that the bulk of the school closings during Grier's controversial tenure as superintendent since 2009 have disproportionately been aimed at schools in African-American neighborhoods, with the school properties subsequently sold to charter outfits, private schools or in Ryan's case after its closure last year turned into a magnet school.

Some of the players have changed since last March.   Juliet Stipeche is now the HISD board president, and removed three of the schools slated for closure off the list.    Too bad she didn't kill it period.

At this upcoming Thursday board meeting you'll have Wanda Adams, my former city councilmember sitting in the seat formerly occupied by Grier ally Lawrence Marshall.  Adams just penned a Houston Chronicle op-ed concerning the shifting goalpost for school closures and the need for a consistent set of metrics for doing so

The shifting goalposts and dismissive lack of action on what the community says is needed to reverse the negative enrollment problem HISD caused is what is pissing many of us off in this fight to keep JJ open.

We know the district caused the problem, arrogantly will not listen to the community suggestions to fix the problem, and are continuing to use debunked talking points to try to justify the school's closure.

If you wish to speak at Thursday's board meeting, you have until 4:30 PM today to sign up and it's Item F-1 on the board meeting agenda.

Stay tuned because there will be fireworks at this Thursday's HISD 4 PM CDT board meeting.
.
Posted by Monica Roberts at 2:00 AM