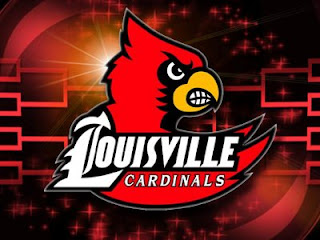 I love March Madness like 'errbody' else, except when they keep showing replays of the last painful seconds of a certain 1983 NCAA tournament final game in Albuquerque.

Since it's Women's History Month, I also do a bracket for the NCAA women's tournament,  and that goes up tomorrow.

As for last year's NCAA men's tournament, for the second straight year I picked the eventual NCAA champion correctly (Louisville), but not without some of my regional brackets being totally trashed.

And yeah, it irritated Cat Nation to no end that the Cards won the title in a year they didn't even make the tournament and that NCAA championship trophy moved to the Louisville end of I-64.   Speaking of irritated, the defending champs are pissed off about their seeding.

Will the NCAA title stay in the state of Kentucky?   I'm saying yes.

Later today the Journey to the Jerrydome begins for 68 teams with the First Four games tonight and tomorrow night.   For the first time since 2003 the Texas Southern University Tigers are in the Big Dance after winning the SWAC tournament championship at Toyota Center in H-town last weekend .   You'll also recognize TSU Tiger coach.Mike Davis.   If that name sounds familiar, he's the same Mike Davis that took Indiana to the national championship game in 2002.

Wichita State became the first team since the 1991 UNLV squad to enter the tournament unbeaten but fell to Duke in the title game.    Can the Shockers shock the NCAA b-ball world and become the first champion with a perfect record since Indiana ran the table in 1976?

But as to who I think will be cutting down the nets at AT&T Stadium, as you can see, I'm picking a repeat champ.  I'm 4-3 so far in picking men's NCAA champs, and we'll see if I'm correct for the third year in a row on April 7.

So enough jibber-jabber and let's get busy with this year's edition of my NCAA Men's tournament bracket.