The Lone Star State as you know has some fantastic activists living in its 268,561 sq. miles of territory and in the 16 years I've been involved in the TBLG human rights fight I've gotten to meet and know a few of them.

One of the people I have the pleasure of talking to from time to time is Omar Narvaez.

Omar is based in the Dallas area, is the former president of the Stonewall Democrats of Texas and is the community educator for Lambda Legal’s south central regional office in Big D.

Narvaez made a little history when he was sworn in February 26 as the first openly gay trustee of the Dallas County School Board.    The DCSB governs the 14 school districts in Dallas County and has three countywide positions and four district seats that align with the Dallas County Commissioners Court

The DCSB's primary job is providing services for the Dallas County ISD's in the areas of transportation and information technology, as well as continuing education for teachers.

“It’s not a well-known seat, but it’s one that affects the entire county as far as schools go and ISDs,” he said in a Dallas Voice interview, adding he’s excited to focus on a position that affects youth. “They are the most important entity for our future.”

Narvaez is serving out the remaining DCSB term of trustee Maricela Moore, who resigned from it in January.  That term expires in May 2015 and he has yet to decide if he is going to run for reelection on the DCSB. 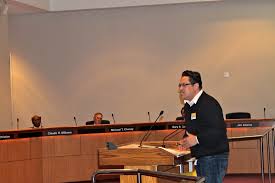 He is also quite aware of the fact that he is now one of the few openly gay officials in Dallas County.  It is a short but distinguished list that includes Dallas County Sheriff Lupe Valdez, District Clerk Gary Fitzsimmons and 116th Judicial District Court Judge Tonya Parker.

“There’s not a lot of us, but at the same time we are putting ourselves out there, and our orientation does not deter us from running for office,” Narvaez said.

Congratulations Omar!   Knowing you, you'll have no problem focusing on being the best person on the DCSB.  The children in those 14 Dallas County ISD's couldn't have a better advocate for them.