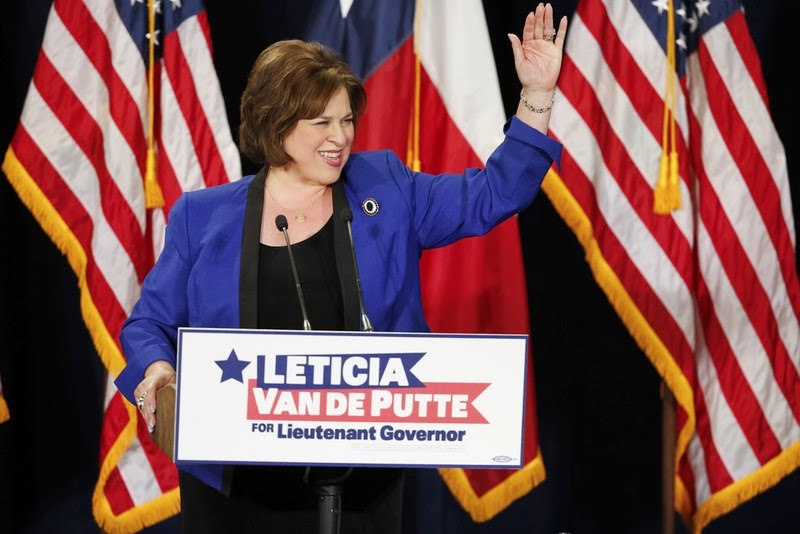 While the state and national attention has been focused on State Sen.Wendy Davis in her run for the Texas governor's chair, I do need to (and will continue to do so until November 4) point out there's a wise Latina running for the more powerful in Texas chair of Lieutenant Governor..

State Sen. Leticia Van de Putte is the Democratic nominee for Lt. Governor, and awaits the winner of what is going to be a bruising Republican primary between current Lt Governor David Dewhurst and State Sen. Dan (I'm not on ESPN) Patrick.

So yeah, it's important that LVP win this race, because the Lt. Governor has major sway over the Texas legislature as President of the Texas Senate.  The Lt. Governor picks the committee chairs, sets the legislative agenda, establishes all special and standing committees, appoints all chairpersons and members, and assigns all Senate legislation to the committee of his or her choice. The Lieutenant Governor as you witnessed during Sen Davis' filibuster, decides all questions of parliamentary procedure in the Senate. He or she also has broad discretion in following Senate procedural rules.

The Lieutenant Governor is also a member of the Legislative Redistricting Board (together with the Speaker of the House, Attorney General, Comptroller, and Land Commissioner), which is charged with adopting a redistricting plan for the Texas House of Representatives, Texas Senate, or U.S. House of Representatives after the decennial census if the Legislature fails to do so.

So yeah, that office packs a lot of power with it, and it's important that Sen. Van de Putte get elected to it if Sen Davis is going to be able to move her agenda should she become the governor of the Lone Star State.

LVP was interviewed recently on MSNBC about the upcoming campaign and asked whether this is the year that Texas finally after 20 years of GOP control turns blue.