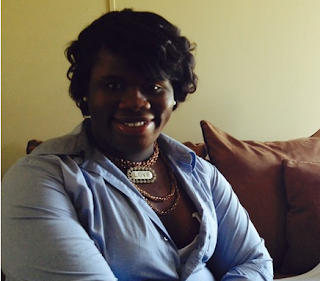 If you wonder why I go ballistic every time I hear people who don't share my ethnic background ignorantly stating public accommodations language is not important when it comes to protecting the human rights of trans people, I call bull feces on that.

If you're a non-white transperson, that public accommodations language is critical, especially since we seem to find ourselves in situations far more frequently in which discrimination is aimed at us based on our ethnicity and our trans status..

Meet 21 year old Kaye Bowens, a girl like us living in Star City, Arkansas.   It is a town 75 miles SSE of Little Rock and Bowers until recently was an employee at a local McDonald's.

Bowens made it clear when she was hired in December that she was trans and had begun her transition three years ago..  She used the bathroom appropriate to her outward gender presentation and had no trans status related job problems until two weeks ago.

Obviously either a coworker or somebody in the area had a transphobic problem with her and complained.   Bowens found herself being confronted in the women's restroom by the store's shift manager who told her she should be using the men's room.

The very next day she was called into the general manager's office and terminated.   When she threatened to file a lawsuit over the obvious gender discrimination,  she was offered her job back later that day provided she agreed to the dehumanizing demand of using the men's restroom.

Bowens description of the events was corroborated by two fellow employees who asked to remain anonymous out of fear of retribution.

If I'm a good worker for you, what does it matter where I use the restroom?" said Bowens.

Bowens has now filed an EEOC discrimination complaint against the Mickey D's in question to which Michael Retzer, the owner of the McDonald's franchise in Star City issued the following statement on Wednesday:

“We believe in the value of a diverse workforce, equal opportunity and a workplace free from all forms of unlawful discrimination and harassment.  As such, we continue to do our best to meet the needs of our employees and customers, and we are reviewing this situation carefully. It is important for us to share that the employee in question is a current employee and has not been terminated. We have asked the employee to discuss this issue with us, but we have not received a response.”

Yeah, right.  Now that your rumps are in the legal wringer, and you have made national and international news for your transphobic bigotry, now you wanna talk.

Here's hoping the situation does end in a satisfactory conclusion for Ms. Bowens.

This is also another concrete example of why the federal ENDA law needs to be passed ASAP and the gender identity language needs to stay in it.
Posted by Monica Roberts at 6:00 PM