"beings of an inferior order, and altogether unfit to associate with the white race, either in social or political relations, and so far inferior that they had no rights which the white man was bound to respect."
--Chief Justice Roger B. Taney

It would give to persons of the negro race, ...the right to enter every other State whenever they pleased, ...to sojourn there as long as they pleased, to go where they pleased ...the full liberty of speech in public and in private upon all subjects upon which its own citizens might speak; to hold public meetings upon political affairs, and to keep and carry arms wherever they went.
--Chief Justice Roger B. Taney

There are days I read those words and feel that elements of the white community in 21st century America still believe that.

Moving on to talking about this sad anniversary.

Today is the day that Dred Scott v Sandford, one of the worst Supreme Court decisions ever, was handed down on March 6, 1857.   Slavery supporting Chief Justice Roger B. Taney wrote the majority opinion for the Court.. 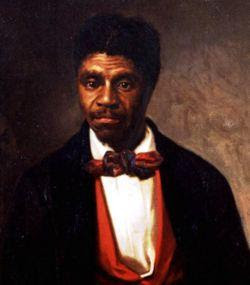 It not only ruled 7-2 the Missouri Compromise of 1820 was unconstitutional, but held that African-Americans whether slave or free, were not citizens of the United States and had no standing to sue in court.

Interesting to note the birthers tried to use Dred Scott v Sandford in their attacks of President Obama that has long since been overturned by the 13th, 14th and 15th Amendments to the Constitution.

But far from settling the question of slavery as Taney hoped, the Dred Scott Decision poured gasoline on a simmering fire, exacerbated tensions between the slaveholding South and the abolitionist North, caused the Panic of 1857, split the Democratic Party, helped solidify a nascent Republican Party, encouraged the secessionist politicians in the South to make even bolder demands in support of slavery, helped grease the skids for the American Civil War that broke out three years later and laid the ground .

While Dred Scott didn't receive justice from the SCOTUS that day, his and his wife's freedom that he sued for was purchased by the sons of Peter Blow, his first owner in May 1857.   But Scott unfortunately didn't get to enjoy that freedom for long.   He contracted tuberculosis and died 18 months later on November 7, 1858.   His wife Harriet passed away June 17, 1876.

And Taney's reputation was forever tarnished by that unjust decision.

Taney was correct on one aspect of that horrid decision.   Today I and other African Americans are not only recognized as citizens of this country (the level is still debatable) we are born in, we run for and hold public office, have those political meetings, speak truth to power, travel and live wherever we please inside the borders of this nation, vote (when the Repugs aren't trying to suppress it) and some of us even carry arms.

But for those of us who have those freedoms, its anniversary days like this in which we need to take a step back and realize that a little over 150 years ago we didn't.    We owe our freedoms to people like Dred Scoot and countless others as Africans in America, and we have to fight tooth and nail to ensure that they are never rolled back.