Annie Is Black, And The Pointed White Hoods Come Out

A remake of Annie is about to hit your local multiplexes that when it was in the discussion stages, Willow Smith was rumored to be in the running for the part but it went to Oscar Best Actress nominee Quvenzhané Wallis. 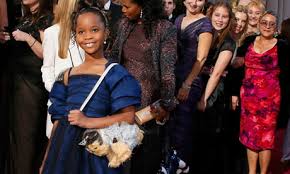 And now that the trailer has come out for this movie coming soon to your local multiplex starring her and Jamie Foxx, I was shocked but not surprised to read that elements of white America are losing their damned minds on Twitter about it.

So the same whiteness that has no problem with Jared Leto being cast as a trans woman or defending 70% of movie roles going to white males, arguing that 'casting should be color blind' and 'the best actors should get the part' now has a racist foaming at the mouth problem with Quvenzhané Wallis being cast as Annie?

Sigh.  The War on Blackness continues.

The same White America that last week was tying itself in pretzel logic like knots trying to justify a white man playing a transwoman as moi and the trans community complained about it, had no problem with that same white male winning an Oscar for that problematic portrayal, smugly told the trans community to 'get over it' while hiding behind Calpernia Addams' skirts to do so, is now having a vanillacentric scented hissy fit because a Black girl is playing Annie.

Their pointed white hoods are showing along with their white sheets.

I'd need another post to document all the times that white people have played Black or other ethnic characters in movies.

Another example was Ava Gardner being chosen over Lena Horne and using the makeup Max Factor developed for Lena to play the mixed race character Julie LaVerne in the 1951 movie Show Boat when hello, Lena Horne practically was living that character's life.

It's not like this is the first time a classic film has been remade with an all-Black cast.   There was the musical The Wiz that was turned into a 1978 film starring Michael Jackson and Diana Ross.

Most recently the movie Steel Magnolias was reimagined with an all Black cast featuring Phylicia Rashad and her daughter Condola Rashad, Queen Latifah, Alfre Woodard, and Jill Scott.

It also speaks to another problematic issue that if the movie in question doesn't have Blacks interacting with Whites in servitude, deference, or emotional dependence, it results in whites leaving in droves after it starts.


I witnessed that phenomenon firsthand with the movie White Man's Burden. It starred John Travolta and Harry Belafonte in which the societal script was flipped and it was white peeps living in the hood and Black folks living in Beverly Hills.
I noticed whites leaving the theater and heard one brother say to one white guy exiting the theater, "What's wrong? Can't handle this movie? This is what we deal with everyday in America."
Another reality that needs to be dealt with is that in 21st century America, many of the orphans in those homes and the foster care system look like Quvenzhané.

As white people in this country, you can count on the fact that every week, a Hollywood movie will open that has casts who predominately look like you, and share your ethnic heritage and background.   I don't have that luxury as a person of color.

An Annie that reflects my ethnic background is quite interesting to me, Black parents and the Black girls Quvenzhane's age who will see themselves reflected on the silver screen for once.

That should be celebrated, not racistly denounced..

I was looking for the "like" button. I totally agree with you and I'm looking forward to this movie as much as I did Karate Kid.