What Would 50 Days Of Nonviolence Look Like For A Trans Person? 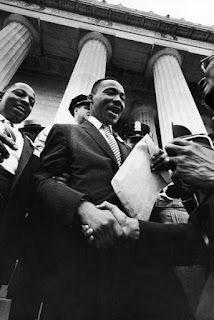 Was happy to note that on the 45th anniversary of the assassination of the Rev. Dr. Martin Luther King, Jr a campaign is being launched to tackle youth violence in the ATL.

The '50 Days Of Nonviolence' program being sponsored by the King Center is challenging the youth of Atlanta to abstain from violence for the remainder of the school year.  Bernice King, the daughter of Dr. King and CEO of the King Center echoed her father's words by stating  "As my father said, 'The choice is no longer between violence and nonviolence. It is either nonviolence or nonexistence.'"

She also said, "We believe young people have a leadership role to play in creating a nonviolent society." .

I would add to Ms. King's words it's not just young people who have a role to play in creating a nonviolent society.  Adults have a major role to play in it as well because they are the ones sitting on the school boards, the city councils, the county governments, the state legislatures and in Congress who have the power to enact legislation that will help shape society toward that lofty goal.

Noting there is a sizable cluster of transpeople in the Atlanta metro area, transpeople in the ATL and around our nation would definitely like to see that 50 days of nonviolence spread beyond the younglings.  We'd like to see adults in the ATL and beyond step up to the plate and role model it as well being that we have unacceptably high levels of violence aimed at us.

So what would 50 days of nonviolence look like for the trans community?   That's seven weeks plus one day.   It's 50 days of experiencing people not trying to kill, physically or sexually assault girls like us.  It's 50 days of not hearing or having provocative hate speech aimed at us. 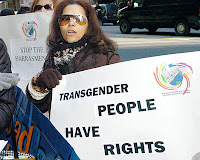 It's 50 days of transpeople taking coordinated, peaceful action to push toward making trans human rights a reality in our country.  It's 50 days of  us using nonviolent methodology, tactics combined with Kingian love to fight back against unjust laws like Arizona's 'No Loo For You' SB 1045 Bill and other unjust laws aimed at trans people.