That still doesn't change the fact that once again you had ciswomen playing what is ostensibly a trans role.
Even with different casting.

When I first wrote about the movie in 2009,  Nikki Reed and Kristen Stewart were set to play the lead roles in the movie K-11.   But as can happen with movies in development, scheduling conflicts can arise or other issues occur that force announced actors to pull out of a project. 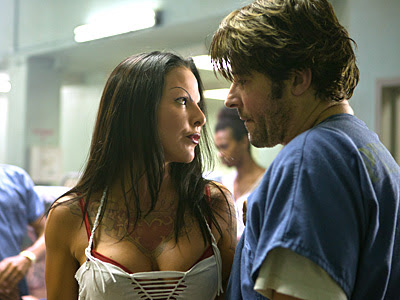 Kristen Stewart was forced due to a scheduling conflict to pull out of this film her mother Jules Stewart was producing.   She still has a small voice cameo in it and the role of Butterfly she was supposed to play was given to Portia Doubleday.   The Mousey role, the queen bee of the K-11 dorm went to veteran Latina actress Kate del Castillo after Nikki Reed dropped out of it.

Granted Calpernia Addams and Andrea James served as coaches for del Castillo, she embraced the challenge of it, and I'm not saying ciswomen can't or shouldn't play transwomen if they are offered the part.  Felicity Huffman, Kerry Washington, Rebecca Romijn, Sheryl Lee Ralph and Chloe Sevigny come to mind as ciswomen who have pulled it off successfully and to rave reviews in various movie and television projects.

But ciswomen are offered those roles far too often, especially when you have transwomen who are acting in Hollywood such as Laverne Cox, Jamie Clayton, Calpernia Addams, Candis Cayne, Alexandra Billings, Aleshia Brevard, and others who are striving to get the level of recognition these ladies have.

It would be nice for them to get paid and get a shot at a role they have some intimate familiarity with like transwomen in other countries get a chance to do more frequently than their American counterparts..

And I also have to agree with Gina Morvay of the Skip The Makeup blog and this comment she left on the original K-11 post that is still valid.

As you've pointed out, in many other countries trans people have played trans people... and, surprise, it comes out a lot more moving and full blooded than having someone like Nicole Kidman or Nikki Reed do their actor schtick and pretending it's accurate. And the biggest joke is, people would be more interested to see a film with real trans actresses or actors than seeing yet another Nicole Kidman bomb or Nikki Reed vehicle (anyone remember '13'?).


I know just like you, I'd be quite interested in seeing a movie or television series in which trans women play realistic trans characters.   I'm not holding my breath on that happening any time soon.
Posted by Monica Roberts at 12:00 AM