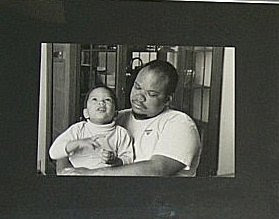 I've been thinking about him recently, and when I Googled his name I stumbled across the obituary that reminded me on this date in 2000 the African-American and national trans community lost one of its major pioneering leaders in the person of Marcelle Y. Cook-Daniels. Cook-Daniels was born in Washington DC on March 1, 1960 where he resided until he moved to Vallejo, CA in 1996.  Marcelle worked for the Internal Revenue Service and a computer programmer/analyst and for Norcal Mutual Insurance.

He was also diligently working toward obtaining his masters degree in computer science at Golden Gate University.

Marcelle during that time period was one of our early national transmasculine African-American  activists and leaders.  He was a quiet, principled and dedicated man who labored tirelessly to raise awareness about trans and LGB issues.

He role modeled his personal values of family love, commitment, honesty, openness, and public service through being a loving son to his mother Marcella Daniels, supporting his longtime life partner of seventeen years Loree Cook-Daniels, and being a devoted father to his son Kai Cook-Daniels.

Marcelle's education and advocacy work on behalf of our community included presentations at the 1999 Creating Change Conference in Oakland (where our paths crossed but I sadly never met him), the 1998 "Butch-FTM: Building Coalitions Through Dialogue" event, several True Spirit Conferences, and numerous educational and advocacy events.

Marcelle was interviewed and photographed for the 'Love Makes A Family" book; the Dawn Atkins' book "Looking Queer: Body Image and Identity in Lesbian, Bisexual, Gay and Transgender Communities," and "In The Family" magazine.

He was an active supporter of COLAGE (Children of Lesbians and Gays Everywhere) and provided substantial material and volunteer support to the Transgender Aging Network, four True Spirit conferences, and the Maryland based transmasculine group The American Boyz that eventually folded.

He sadly lost his ongoing struggle with depression and took his own life.  His memorial service on April 26 was attended by family, friends, colleagues and all the people whose lives he'd touched during his 40 years with us.

For you trans men who never had the opportunity to meet Marcelle, you definitely would have liked and admired him.  You are building upon the work he started and are walking in his footsteps, and I'm writing this post on the anniversary of his death to ensure that his contributions toward building the United States trans and transmasculine communities are never forgotten or disappear.

Marcelle, you are still missed by all the people who had the pleasure of knowing you.  I'm saddened it didn't happen for us while I was in Oakland for Creating Change.  I hope as you look down upon us you are pleased to see the trans and SGL rights progress we have made since 2000, especially in your hometown of Washington DC and the state of California.

While we still have much work to do, your trans brothers and sisters are laboring mightily to live up to the high standards you set for us.  I still wonder at times how much farther down the path of trans human rights coverage we would be if you and Alexander John Goodrum were still here and had the opportunity to mentor mine and this current generation of transmasculine and transfeminine activists.

Rest in peace Marcelle, and say hello to Alexander for us.
Posted by Monica Roberts at 12:00 AM