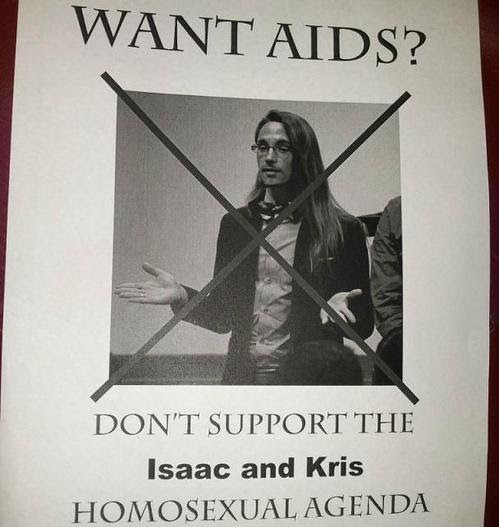 One of the new folks I met on the UH-Downtown campus when I participated in their panel discussion last week was Kris Sharp, the UHD student body vice presidential candidate and junior social work student who was targeted by homobigots.

Of course, Sharp was flabbergasted this happened but doesn't want to prosecute this fool.

Sharp told the Houston Press, "There's a culture at UHD that is somewhat less accepting of LGBT youth, but something of this magnitude is completely mind-blowing. I knew, going into the election, that I could possibly be targeted because of my sexuality -- but I had no idea that it would go to this level."

The person then followed up their initial criminally shady behavior by impersonating Sharp online and claiming in an e-mail they sent to the Houston Press there would be a campus rally on April 3 to protest what happened.  Since 2009 impersonation of someone on the Net in Texas is a third class felony, so if it's the same fool, he's in even deeper trouble.

But more on this developing situation later.   It's election week on the UHD campus which started yesterday and runs through the 26th.   Time to cast votes for the Valdez-Sharp ticket if you are a UHD student.  This is one in which I hope the karmic wheel moves swiftly on two fronts and the perpetrator is caught.

Good luck Kris and hope you and Isaac Valdez overcome the haters and you emerge victorious.