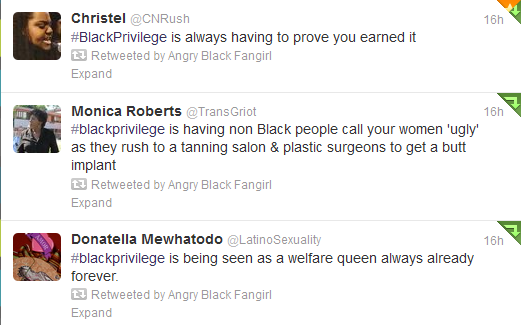 It started as a Black Twitter smackdown to a racist Tumblr page, but has raged on Twitter since Friday night and gone viral.   It was at one point a trending Twitter hashtag

It's the #BlackPrivilege Twitter hashtag, and it has struck a nerve on many levels with Black Tweeps including Toure of MSNBC's 'The Cycle'.

You know I had to jump in on this and was happy to see some of my comments have been retweeted.  We also had some peeps try to derail the feed as many Black Tweeps predicted would happen and claim the racism is a figment of our imaginations or we're 'perpetuating it' by talking about it.

The #BlackPrivilege hashtag is now going global with respondents from other parts of the African Diaspora such as Canada and Great Britain starting to check in.

It'll be interesting to see how long the momentum continues with this and if it even gets any mainstream media coverage.

Somehow I doubt that it will.