Toni Gets To Wear Her Prom Dress

As if there was going to be any doubt this was not going to happen, especially in light of the fact this same issue cropped up in the Waller ISD last year

It seems like every year since I started TransGriot in 2006 this issue has cropped up over the last two decades.  Even if the students lose a round with school administrators, the court system (when it goes that far) usually rules in favor of the trans student.

When I stopped in last night to visit my homegirl Vanity (who owns a transformation studio inside the Loop) and attend her weekly Wednesday meet up I hadn't been to in a while, I walked in on Toni Zamazal and her family selecting her dress for the event and getting a makeover for the upcoming May 11 prom.

If you haven't heard, Toni is the trans student whose request to wear a dress at her Spring High School prom was initially rebuffed by an assistant principal and was told she must wear a tuxedo.   That was until the ACLU, her family and the angelic troublemakers in the Houston area trans community got involved. 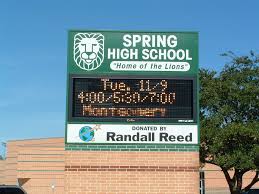 Spring High principal Donna Ullrich stated in a Houston Chronicle interview that she did not object to the request, but she needed to ask the school board because it was a "community decision."

After the ACLU sent a letter explaining the assistant principal's decision was unconstitutional, the Spring ISD attorney hammered out a deal with the ACLU and sent a March 26 letter to Zamazal stating she must meet the standards of the prom dress code for females, including dresses that reach at least mid-thigh and neatly kept hair.

I don't think that will be a problem.   Zamazal said in a statement she wanted to wear a dress to prom "because I wouldn't have felt comfortable at all showing up in a tux. I'm so grateful that my school has agreed to let me be myself on such an important night."

So are we Toni.. I noticed how happy you were last night as Vanity was applying and finally finished your makeup. You looked beautiful when she was done and I hope you have a fun and memorable prom night.

I know you will because you'll get to be yourself on May 11.  As for what color her dress is?  All I'm going to say is that Toni has narrowed it down to two tasteful selections that I'm going to keep a secret until she unveils them for you on prom night.

But Toni will look gorgeous in either one of the tasteful dresses she selected.
Posted by Monica Roberts at 3:00 PM