First the details of the third African-American transwoman this month to die too soon at the hands of a murderer, then I go Maya Wilkes concerning the over the top transphobic 'reporting' of  Cleveland Plain Dealer stenographers (they don't deserve the title of reporter) John Caniglia and Jo Ellen Corrigan

20 year old C. Acoff (I refuse to use the old name because this sistah has been disrespected enough) from Cleveland was found April 17 in a retention pond on MacKenzie Road, north of Cook Road, in Olmsted Township, OH nude from the waist down.  She was stabbed multiple times tied with a rope to a block of concrete

The body was found at 3:30 PM EDT by a renter living in an apartment building on the 20 acre property in the township. Acoff had been missing since March 27 and the body did match a previously filed missing person's report with the Cleveland Police Department.on April 19. 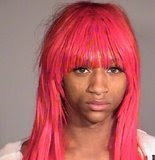 Police are looking for the wastes of DNA who committed the crime.

Now that I've gotten the basics out of the way, lets talk about the journalistic hate crime that was just committed against Ms. Acoff.  Caniglia and Corrigan must have read this TransGriot post because this is the worst piece of alleged reporting on a trans murder I've seen in a while.

Misgender the person at every opportunity?  Check
Use police mugshot?  Check
Drag old criminal record into the story?  Check
'Deception meme' injected into story?    Check
'Tragic transsexual' meme injected into this story?   Check
Use salacious and sensationalist headlines?  Check
Not give a rats anus about the victim's dignity and their femme presentation?  Check
Disrespecting another African-American transwoman?   Check.

I am so fracking sick of African-American transwomen who have unfortunately been killed repeatedly being disrespected by predominately white reporters.  Would you have done a story on a white cis female murder victim that way?   Would you have used a mug shot or plastered her criminal record all through a story reporting on her death?

No John Caniglia and Jo Ellen Corrigan, you damned sure would not have disrespected a white cis female murder victim that way even if she had a criminal record.  You probably would have left it out of the story or your editor would have done so before publication.

But you (and your editor) felt it was okay to disrespect Ms Acoff  in that jacked up manner. Is it because you and your editor actually hate transwomen?   If you don't, the two articles you wrote sure do leave readers (especially in the trans community) with the impression that you don't care about or think transwomen, and especially African-American transwomen don't deserve dignity even in death.

You damned sure left no room for doubt to local, national and international trans readers and our allies how you felt or whether you even cared about the victim.   It's also apparent you weren't concerned how these stories would be perceived by a community who is beyond sick and tired of being sick and tired of being dissed in the media.

I'm even more pissed off about this journalistic hate crime because this is the third African-American transwoman who has been killed this month and the second who was disrespected by her local media outlet.

It's obvious you haven't heard of the AP Stylebook guidelines on how to RESPECTFULLY report on transgender people, so let's go over them shall we?

Transgender: Use the pronoun preferred by the individuals who have acquired the physical characteristics of the opposite sex or present themselves in a way that does not correspond with their sex at birth.

These guidelines have been in effect since 2001, so I'd love to hear your excuses for how not one but TWO transphobic stories you signed your name to (and your editor allowed) got published.

Better yet, talk to GLAAD about why you did it.  I'm sure they'll be calling soon to ask why.