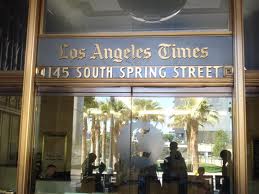 Been keeping an eye on Los Angeles and the unfolding story since February concerning the local trans community's outrage over a transphobic LA Times story featuring murdered transwoman Cassidy Vickers.

The story triggered a petition drive spearheaded by Gender Justice LA seeking a face to face meeting with LA Times officials to air grievances over the Vickers and  past misgendering articles.  They also wished to have the dialogue to suggest ways of improving coverage of the Los Angeles trans community and ensure transphobic reporting from their paper of record doesn't happen again.

The Times agreed to meet with the local activists, GJLA and GLAAD over the problematic coverage, and the meeting took place yesterday.  Hannah Howard was kind enough to send me a report of the meeting that she compiled.

1. The LA Times acknowledged mistakes in terminology and pronoun usage in the article about Cassidy Vickers
2. They acknowledged and apologized for harm this caused the community
3. They also acknowledge the need to provide context about trans discrimination when writing about crimes involving trans victims.
4. They acknowledged the need to attribute any terminology used by family members that doesn't match a person's chosen gender identity as their perspective and not representative of a neutral viewpoint.
5. They acknowledged they need to learn more about the community to accurately report on it
6. They committed to a trans sensitivity training for their staff
7. They gave us their internal style guide for talking about transgender issues for us to review and edit. Following edits, they committed to distributing it to their entire staff
8. They committed to distributing GLAADs updated style guide for talking about transgender issues when it is released next month to their staff.
9. They committed to using Gender Justice LA, GLAAD, and the TEEP program as a resources to check in with before publishing articles about trans issues.
10. We pitched to them a number of stories they might also consider writing about the LA trans community, including writing about GJLA's Theatre Of The Oppressed program and Transgender Leadership Development Program, profiling Trans 100 members and LA residents Bamby Salcedo or Michelle Enfield, documenting the state of talks between the trans community and LA County Sheriffs and incorporating it into ongoing coverage on the sheriff's department, and writing about the success of the TEEP program that serves as a model for trans-employment programs around the country and the world. Although they didn't definitively say they would do each of these, they were very enthusiastic about the stories in general, and they eager for us to help them dissever more stories they could write about the trans community.

Overall, I think it was productive meeting and they seemed very receptive. As with all these types of meetings, it is only a start and hopefully dialogue will continue over the coming months and years. But I think was a good start, and there is no way it could have happened without the grassroots response of so many amazing activists and allies over the past couple months. Everyone who signed the petition, came to the delivery event, publicized the issue, or otherwise contributed should consider themselves a true trans hero!


GLAAD is also publishing an article about the meeting and I will send the link when they do. Thanks Hannah.  Will be interested to hear GLAAD's perspective on what took place yesterday.

Your community fight was also important because like the New York Times, the LA Times is read far beyond the boundaries of your city and is an opinion shaping paper of record .  It's also why I was keeping up with what was transpiring on the Left Coast in these electronic pages.

It's important for our trans stores to be told in the media.  But HOW they are told matters.


I hope the Times does stay committed to what they outlined in yesterday's meeting and it does result in better coverage for trans people in Southern California and nationally
Posted by Monica Roberts at 9:00 AM