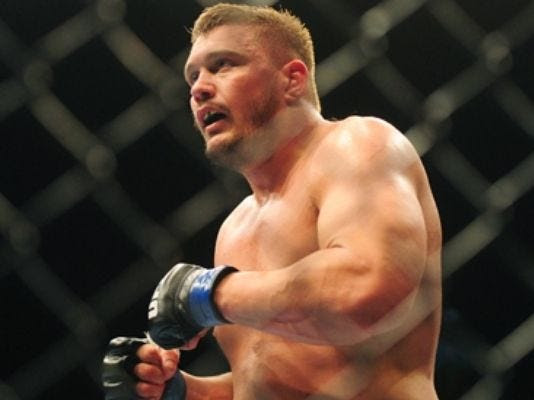 UFC heavyweight boxer Matt Mitrione ended a two match losing streak by knocking out in 19 seconds Philip De Fries in their bout in Sweden Saturday night to push his record to 6-2.

He went on the MMA Today show and got knocked out yesterday by his own big mouth.

Mitrione has been suspended and is under investigation for launching into a vicious transphobic tirade near the end of his interview on MMA Today with Ariel Helwani aimed at Fallon Fox..

"She's not a he. He's a he. He's chromosomally a man. He had a gender change, not a sex change. He's still a man. He was a man for thirty-one years. Thirty-one years! That's a couple years younger than I am. He's a man. Six years of taking performance de-hancing drugs, you think is going to change all that? That's ridiculous…. That is a lying, sick, sociopathic, disgusting freak."


Matt, I don't see MD behind you name, so how the hell would you know what Fallon Fox's chromosomes are unless you ran the tests?   And BTW, hormone replacement therapy sure does work those kind of wonders on our bodies in less time than you think.  The science and medical evidence back that up and are on Fox's side.

But Mitrione kept going with the tirade that would have made the womyn at certain TERF hate websites proud.

"It's an embarrassment to us as fighters, as a sport, and we all should protest that," he said in his interview. "The woman that's fighting him, props to you. I hope you beat his ass, and I hope he gets blackballed and never fights again because that's disgusting and I'm appalled by that." 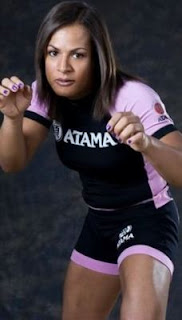 The UFC is appalled and embarrassed by your nekulturny behavior and is about to call your azz on it.


"The UFC was appalled by the transphobic comments made by heavyweight Matt Mitrione today in an interview on 'The MMA Hour,'" the statement read.  The organization finds Mr. Mitrione's comments offensive and wholly unacceptable and – as a direct result of this significant breach of the UFC's code of conduct – Mr. Mitrione's UFC contract has been suspended and the incident is being investigated. The UFC is a friend and ally of the (Lesbian, Gay, Bisexual and Transgender) community, and expects and requires all 450 of its athletes to treat others with dignity and respect."


The MMA fans may not like it and are whining about 'free speech' in the comment threads along with their transphobic science-deficient commentary.   But free speech comes with consequences, especially if you have a UFC contract with a Code of Conduct in it and you let your transphobic bigotry run wild during a televised interview.

While you're on suspension Matt, may I suggest you actually do some reading (if you're capable of doing that) on how HRT works and what the International Olympic Committee and other international sporting organizations who allow trans people to compete have to say about it.
Posted by Monica Roberts at 2:00 AM