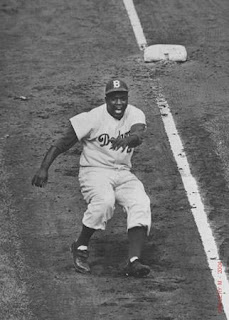 Some historians consider the second most important day in the history of the African-American Civil Rights movement to be the April 15, 1947 day that  Jackie Robinson broke the major league baseball color line.

I wrote about it during the 60th anniversary of that date in 2007.

In that first season he endured racial epithets, flying cleats, pitchers throwing at his head and legs, catchers spitting on his shoes, hate mail and death threats but let his on the field play speak for him. He won over his teammates and his opponents with his unselfish team play and was named Rookie of the Year. Two years later he was the National League MVP. He compiled a lifetime batting average of .311 and was voted into the Baseball Hall of Fame in his first year of eligibility.


A new movie '42', was released over the weekend retelling the story to join with tthe others already made.

Jackie Robinson was such an iconic figure at that time Count Basie wrote a song entitled 'Did You See Jackie Robinson Hit That Ball' to extoll his baseball prowess and the pride Black America had for him..


Today every current baseball player in the majors wore the retired number 42 in honor of him and this landmark event on the road to human rights coverage for all African-Americans.
Posted by Monica Roberts at 7:00 PM