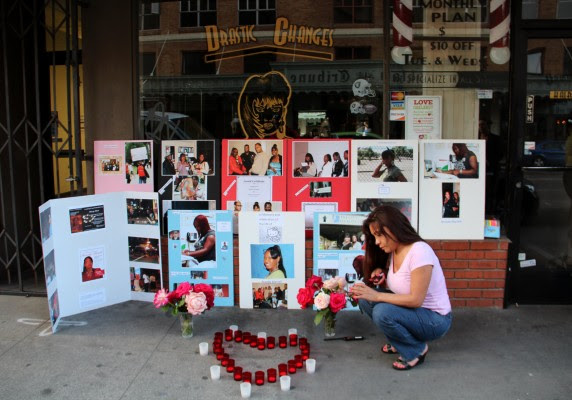 As I mentioned in one of my posts, a memorial candlelight vigil was held in Oakland to mark the one year anniversary of the date that Brandy Martell was killed.   The 37 year old Martell was fatally shot while sitting in her car through the door an window of it at the corner of 13th and Franklin Streets.

Martell was a peer advocate for TransVision, a Fremont, CA based organization for trans women. Martell worked there from February 2007 to November 2011, offering health information and outreach to other transgender women.

Last night Brandy's friends and colleagues gathered at that location to remember her and also point out the perpetrator of this crime has yet to be brought to justice.  They lit candle and movingly spoke of her TransVision work

Oakland Police Chief Howard Jordan was also there urging folks with information on this case to come forward and help OPD solve the crime.

“If you saw something, say something,” said Police Chief Howard Jordan at the vigil. “We know there were a lot of people out there that night who saw what happened. Don’t let Brandy’s death go in vain.”

Don't let the wastes of DNA who committed that crime go free.   If they killed Brandy so callously, they could possibly kill someone else you're acquainted with, too.

They need to be rotting in jail.  Let's do what we can to ensure the crime gets solved and Brandy can rest in peace.
Posted by Monica Roberts at 12:00 PM