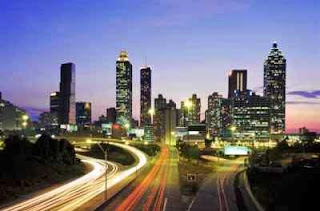 'The City Too Busy to Hate' as the ATL likes to call itself sometimes forgets that motto when it comes to trans women.

I never forgot it when in 1991 trans pioneer Caroline Cossey, who lives in the ATL area, had a key to the city rescinded by then mayor Maynard Jackson after her trans status was revealed.

Jackson said in a statement at the time he would not have granted the honor had he known her "claim to fame" was being transsexual.

That incident came back to haunt him a decade later when Jackson tried to become the chair of the Democratic National Committee in 2001.  Now another ATL mayor in Kasim Reed has to grapple with a contentious issue that has a trans flavor to it.

Cheryl Courtney-Evans in this guest post talks about a draconian proposed anti-prostitution ordinance spearheaded by trans bigot Peggy Denby, the 'Queen of Mean' president of the Midtown-Ponce Security Alliance (MPSA) that calls for banishment from the city of Atlanta for a second prostitution arrest.

The group of prostitutes that this ordinance is aimed at just happens to be predominately made up of girls like us.

In addition to the straight up problematic constitutional questions about this proposed ordinance, a better way to address the prostitution issue would be to spend some of the money you'd be wasting trying to enforce this and target it into a jobs program so these women wouldn't have to walk a Midtown Atlanta street in the first place to get paid.


Ms. Denby, on two occasions, made it a point to tell the gathering that her main "issue" was with "male prostitutes in the Midtown area" and that "there are no longer any female prostitutes in Midtown; they're all males"...this despite the fact that we all know that the majority of the street trade in this area is conducted by transgender women [and we know from previous experience that Ms. Denby has referred to ALL transgenders as "men in dresses" and "transvestitutes"]...so after her second reference to us in this manner (saying all of  Midtown's prostitutes are men), I had to speak up before she could finish putting on her jacket to leave the meeting (and give the rest something to think about for the next meeting) and urge everyone to "evolve past a state of mind that fuel such statements that 'all of Midtown's prostitutes are male', when we know that population is a transgender woman majority...this state of mind is the same one that's results in their presence there in the first place, as it pushes the discrimination that keeps them out of the workplace" (of course, every time I mentioned this "state of mind", I looked pointedly at Ms. Denby, who definitely did not meet my eye).


You can read the rest of Cheryl's post at her abitchforjustice blog.
Posted by Monica Roberts at 10:30 AM