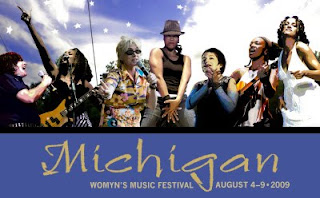 If you're wondering why  this issue between girls like us and the Michigan Womyn's Music Festival keep popping up repeatedly, it's time for another trans history moment.

Cristan Williams has a Transadvocate post up in which Nancy Burkholder tells the story about the 1991 night in which she was thrown off 'The Land'.

Here's an excerpt from it.


While I waited for Laura to return I was approached by two women, Chris Coyote and Del Kelleher. Chris said that she needed to with me regarding a serious and difficult matter. Sensing her urgency I suggested we move away from the women near the fire pit in order to talk privately. Chris said that the Michigan Womyn’s Music Festival was a woman-only event and she wanted to know if I was a man. I replied that I was a woman and I showed her my NH picture ID driver’s license. Then she asked me if I was a transsexual. I asked her what was the point of her questioning and she replied that transsexuals were not permitted to attend the festival. She said that MWMF policy was that the festival was open to “natural, women-born-women” only. I replied that nowhere, in any festival literature or the program guide was that policy stated. I asked Chris to please verify that policy and she went to the office to contact the festival producers, Lisa Vogel and Boo Price. Sometime during this conversation I waved Laura to come over and she witnessed much of what transpired.

I continued speaking with Del. Del stated that the reason the policy was not in any literature was because the issue of transsexuals had never come up as a problem before. Del added that the policy was for the benefit of the transsexuals’ safety and the safety of the women attending the festival. When I pointed out that there were other transsexuals on the land she acknowledged that this was true. Then she added, ‘We haven’t caught them yet, but we did catch you.”


I could care less about the MWMF and have no desire to sitting in the woods in Hart, MI swatting mosquitoes for a concert.  But neither am I going to stand idly by and allow the rabid TERF ideological driven ignorance and transphobia of MWMF and its not anywhere in print anti-trans exclusion policy to keep transwomen who do want to experience the event away from it.

You can read the rest of the post here.