PRIDE Houston, What Were You Thinking?

Last month I attended a meeting in which we tried to resolve an issue not of our own making that once again has the Houston Black LGBT community stuck uncomfortably in the middle.

A few weeks ago the Houston pride parade was controversially moved from its longtime location in the Montrose gayborhood to downtown.

It was controversial because while the now 37 year old  nighttime parade has probably outgrown Montrose's ability to handle the crowds that attend it, the disagreement has been between folks who want to keep that piece of Houston LGBT history there versus the folks who thinks it is past time our diverse city have it downtown.

The PRIDE committee's move of the parade to downtown  without community input pissed a lot of people off in the Houston LGBT community.

The tone deaf responses of several PRIDE Houston committee members at a contentious October 4 town hall meeting conducted after the move only added to the community pissivity over the move.

One of the other things that was done by PRIDE Houston was the parade date was moved from the traditional last weekend in June that coincides with the historic June 28, 1969 date of the Stonewall Riots, to the third weekend ostensibly so it wouldn't be so close to the 4th of July weekend. 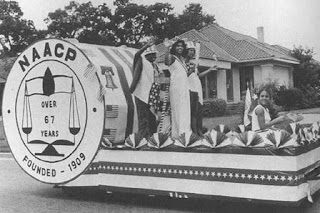 Well, the problem with that date is that it conflicts with Juneteenth, which is a sacred holiday to Black Texans.

Frankly I'm stunned that white LGBT Texans would NOT know about Juneteenth, the history of it, or the fact that the efforts to make it a state holiday originated here in Houston with former state Rep. Al Edwards spearheading them.

But then again I shouldn't be surprised anymore about the stunning depths of vanillacentric rainbow flag waving cluelessness to anything that doesn't revolve around them.

A group of Houston Black LGBT leaders and allies with multiple ties to mainstream African American community organizations, sensing the potential political and PR problem with this parade date conflict, asked for a meeting with the PRIDE Houston board.   A meeting was arranged with three PRIDE Houston representatives that took place at the Houston Urban League's downtown headquarters on October 22 in an attempt to reason with them and get them to see why this June 20 date was a terrible idea..

The Black LGBT leaders and allies compiled the following statement at our Strategic Working Group meeting on October 15 articulating on behalf of the Houston Black LGBT community and our allies why this was a bad idea.

As Black LGBT and allied leaders and activists, we strongly and collectively oppose the June 20, 2015 date  of the Houston  LGBT Pride Celebration.  We urge Pride Houston to move the celebration to June 27, 2015.

Holding the Pride celebration on June 20 is a mistake for several reasons, but the top two reasons are 1) it directly interferes with Juneteenth, the oldest known nationally recognized celebration commemorating the end of slavery in the US and 2) it undermines the meaning of the Pride celebration, which at its core commemorates the Stonewall riots, the catalyst for the LGBT movement we know today. The effect of not moving the June 20th date will be disastrous, as it will erode the relationship built among the LGBT community and communities of color, specifically the Black community. 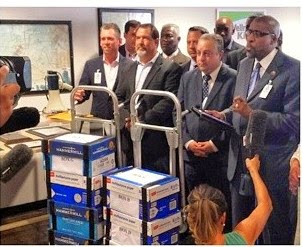 The erosion of these relationships will be detrimental to the Houston LGBT community with respect to the fight to keep the Houston Equal Rights Ordinance. Opponents of the ordinance have vilified it since its inception stating in hateful terms that the ordinance is an underhanded means to grant more rights to LGBT persons while denying others. Because leaders from the mainstream black community feel they were not consulted, they were inclined to believe this false rhetoric of the HERO opposition. It took many long nights from LGBT and allied leaders to correct that misinformation. By holding the Pride celebration the same weekend of the Juneteenth celebration, communities of color will likely be inclined again to believe the misinformation, thereby unraveling community trust and HERO support.

Politics aside, maintaining the June 20 date excludes the Black LGBT community.   At the very least, Black LGBT persons are put in a situation where they have to choose whether to celebrate Pride or Juneteenth with the corresponding communities. Far too often, people who live an intersected life must choose which part of their identity fits the occasion. During the Pride celebration, people, including those who live at those intersections, are able to bring their whole selves to the celebration. Why? Because the LGBT community contains all races, abilities, and identities. Moving the date to June 27the maintains the tradition of inclusiveness, something the LGBT community is continuously striving to attain.

Practically speaking, moving the date now will not cause any confusion and doing so quietly will prevent community uprisings.  At this time, the June 27th date is free, which means the process to change it should be simple.. However, not changing the date will definitely cause more problems than necessary.

So again, we urge you to move the Pride celebration back to the last Saturday of June, specifically June 27, 2015.

And what was the response of the predominately white PRIDE Houston board?  After the October 22 meeting, their representatives said they wanted to present this to the full PRIDE Houston board, and then we didn't hear anything but radio silence from them for two weeks.

We found out via an e-mail dated yesterday from Frankie Quijano, the President and CEO of PRIDE Houston, the board voted 6-2 to keep the June 20, 2015 parade date.

The Houston Black trans, bi and SGL community and our allies are not happy because we know the traditional last Saturday in June parade date (June 27) is available.

While Quijano stated in his tone deaf November 11 email that the pride parade was held on other occasions on that date with no request to move it at that time, neither did we have at the time as we do right now the heightened negativity in the Houston African-American community toward the Houston LGBT community in the wake of a passed human rights law stirred up by anti-gay ministers and conservative activists.

They will see this as another slap in the face to the Houston Black community and I predict it will be spun by the haters as an attempt by the gay community to 'hijack Juneteenth'.

With this boneheaded decision, which is a sadly predictable one from an organizational board that is predominately monoracial and insular in its thinking, PRIDE Houston has just unnecessarily set off some drama that will only inflame the homophobic animus elements of the Houston Black community have for the LGBT community.

It is an animus that Dave Welch, the sellout pastors of the Baptist Ministers Assn. of Houston and Vicinity will eagerly pour gasoline on as the Black LGBT community shakes its head and gets out of the middle of the coming public relations nightmare between these two groups.

Meanwhile the Texas Republican Party and conservative movement foot soldiers will be smiling as they observe their plan working to drive a wedge between key members of the Houston liberal progressive coalition in the African-American and LGBT communities.  .

And once we in the Black LGBT community are forced to choose sides in this no-win situation, we will stand with our people.  The reason we will do so will be simple.  You had a chance, PRIDE Houston to defuse this situation.   But instead you dismissed our concerns as fellow LGBT community members and by extension dissed the  African-American community by not listening to and heeding what we had to say as Houston Black LGBT leaders better positioned to know the pulse of our community.

And now because of your lack of vision PRIDE Houston, a hot political mess has potentially been created, in the wake of the mayoral subpoena controversy and the hate sermons at Riggleworld that will has a deleterious effect on the entire Houston LGBT community and possibly put the survival of the HERO at risk..

PRIDE Houston, what were you thinking?     Obviously you aren't.

TransGriot Update:  Received another e-mail from a TransGriot reader that calls into serious question what Quijano said about the Pride Parade being held on or near Juneteenth.   In fact the earliest date the Parade has been held since 1994 was June 12.