Disappointed Doesn't Even Begin To Cover... 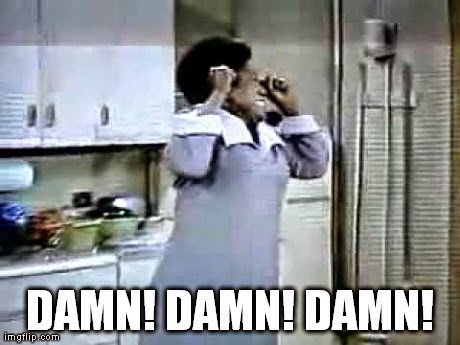 How I feel about the midterm election results last night.

It was a very short night as Wendy Davis and Leticia Van de Putte went down in defeat.   But hey, don't blame Black voters for this debacle.   We tried to save this state and your asses from yourselves but remember, we only make up 12% of the population and the GOP voter suppression laws are designed to stifle our ability to affect elections.

You're welcome Texas Democratic Party, but I'm not holding my breath that the Texas Black community will get the credit along with Latina women for being the one ethnic group in this state who wasn't bamboozled by the Texas GOP bull feces.

And you wonder why the Rev Dr. MLK, Jr. in his 'Letter From Birmingham City Jail' expressed his disappointment in the white moderate and said you were the biggest stumbling block to progress, more than conservatives and more than the Klan.

I'm feeling Dr. King this morning when I look at those exit polling numbers, the gloating going on in GOP circles and the bigots gleefully letting their inner Archie Bunkers out on the Net.

For you Teapublican conservafools to get this midterm win, nationally you had to massively suppress the votes of my people, bamboozle and lie others into believing the Massive Resistance 2.0 you engaged in was the Black POTUS' fault, and spend millions to get turnout down in the 30% range to make it happen..

In Texas you had to get the SCOTUS to reinstate the unconstitutional voter suppression law.  Thanks for nothing Uncle Ruckus, er Thomas.

And for all those Democratic senators and congressmembers that ran away from President Obama and his accomplishments to appease conservative white voters, how did that strategy work out for you last night?

The one Democratic senate candidate that embraced the Black POTUS , Gary Peters in Michigan, won his race, while Louisiana's incumbent senator Mary Landrieu, who called out the race problem in the South and the racism aimed at President Obama is headed for a runoff.

And Democratic Party, you screwed this up as well.   I'll deal with listing your electoral sins later.

I'm not in a celebratory mood and I'm pissed off.   Don't be surprised if the GOP co-signs what I've said about them being the party of whiteness and white supremacy when the 114th Congress starts in January 2015.  And don't even trot out Mia Love or whatever other kneegrow sycophant on your payrolls to claim otherwise or how 'diverse' you are..

But as me, my sis and Mom discussed yesterday afternoon, that may be the only way to wake some peeps the hell up and get them to see that there is light years of difference policy wise between Democrats and Republicans, and the need to be bumrushing the polls in each and every election cycle.

I'm tired of seeing that 'no difference between the two parties' conservalie pimped in liberal progressive circles.   That needs to die before we regroup for the battles ahead..

I also don't want to hear from those of you living in the liberal oases or LGBT enclaves on the coasts, "Why don't you move from Texas and come here?"   Been there, done that and all that happened in the nearly nine years I was gone is that Texas stayed red and my hometown didn't get a comprehensive non-discrimination ordinance until May of this year.

And what makes you think moving to the coasts will be better?   Intolerant people live in those areas, too.  The only way Texas is going to turn blue along with the rest of the South is if peeps stay here and do the hard multicycle work to make that happen.

Can't do that work from the Left Coast, New York City, DC or overseas.

Many of you are also going to find out the had way what I've been reciting like a mantra for years now:  You cannot get liberal-progressive change from conservative governments or politicians.

TransGriot Update:  Turnout for this election according the United States Election Project, 38.6% nationally, 28.5% in Texas.

Once again,, thanks for nothing SCOTUS GOP majority.