25th Anniversary Of The Fall Of The Berlin Wall 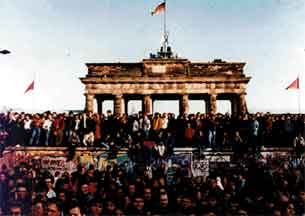 Like the Cold War and Jim Crow segregation, the Berlin Wall was a part of the world when I was born in 1962.   It was erected in August 1961 to stop the flow of East Germans fleeing their 'worker's paradise' to West Germany and came down in dramatic fashion on November 9, 1989.

For something that seemed like it was going to have a permanent place during my time on Earth to the point it was a tourist attraction and two US presidents made speeches near it, the stunning way events unfolded 25 years ago that brought The Wall down and several months later on October 3, 1990 led to the reunification of Germany are still mindboggling at times to me as a Cold War baby.

The Berlin Wall was such a reality in my world that I used it as a visual example of my determination NOT to do something.   I would say to peeps, "That will happen when the Berlin Wall falls."

And now, within my lifetime, before the close of the 20th century, it was beginning to happen before my very eyes.   The official dismantling of the Wall didn't start until the summer of 1990 and was completed in 1992

But happen it did, and the process got started 25 years ago on this date.
Posted by Monica Roberts at 12:00 AM