I was talking about the drag balls that happened in various locales around the country on Halloween in an earlier post.   Those balls occurring on that evening usually drew big crowds and the po-po's looked the other way in terms of enforcing the anti-crossdressing laws that were on the books in many cities at that time.

So what happened when you had those events on days besides Halloween and you were en femme?

Well, you got arrested for violating the anti-crossdressing law.  The one in Houston was only repealed in August 1980.

And sometimes there were Halloween nights in which the po-po's decided they weren't going to look the other way and enforce the law that was on the books.

These are photos of a Halloween 1962 raid on the Artists' Exotic Carnival and Ball at the Manhattan Center  in New York.

Seven years later, it was peeps being tired of the consistent harassment by NYPD and the constant raids of gay bars that led to the Stonewall Rebellion. 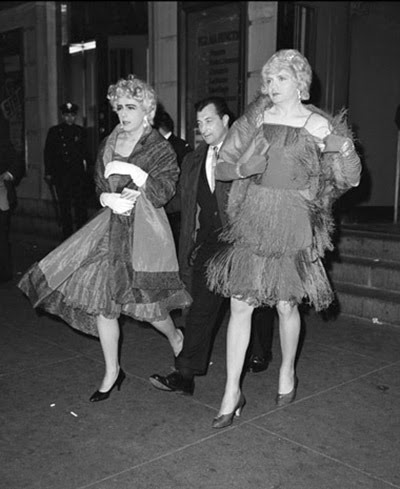 So the next time you're able to gather at a venue to have a ball, or walk the street as yourself without consistent harassment or threat of arrest, take a moment to think about your elders who fought to express themselves in a more hostile climate.

They fought the powers that be of the times so we'd have a better world to live in, and it's time for us to do the same for the next generation of gender variant kids..
Posted by Monica Roberts at 1:00 AM