Just an update to the boneheaded vanillacentric privileged PRIDE Houston decision to not move it from conflicting with the Juneteenth parade on the same June 20, 2015 day.

This is after having it pointed put to them by Houston Black LGBT leaders and our allies that the date is problematic and could put the HERO in jeopardy if they don't wake up and see the big political picture aspects of this.

It has also put the Houston African-American SGL, trans and bi community once again in the uncomfortable position of having to not only choose between the events, but choose which community they intersect and interact with to support.

And on this one, we're going to choose our people.

First up, PRIDE Houston President and CEO Frankie Quijano misspoke lied about the pride parade being held on Juneteenth (June 19) in the past.   Here are the June dates of past Houston pride parades going back to 1994:

So as you can see, the Houston Pride Parade has since 1994 NOT been held anywhere close to the June 19 date of Juneteenth.    Why now?   Is it simply cultural incompetence?   Or was it a deep seated need from the predominately white PRIDE Houston board to get back at the Black community for all the drama and animus stirred up in the HERO battle?

The news is spreading fast since I posted it at midnight.  Edward Pollard, the president of the Houston Black Area Democrats (HBAD) penned this letter to Frankie Quijano: 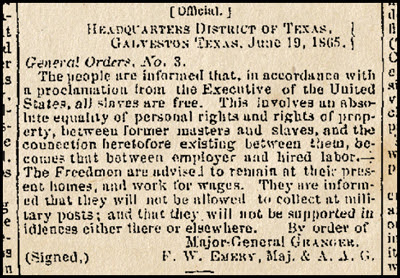 Mr. Quijano,My name is Edward Pollard and I am the President of the Houston Black American Democrats. I am also an attorney and member of the historic Antioch Missionary Baptist Church downtown (oldest black church in Houston built by the newly freed slaves in 1866).I am writing you because I have received news that PRIDE Houston has decided to change the date and location of the PRIDE Parade to Juneteenth weekend downtown. I am not sure if you are aware of the significance of Juneteenth Holiday/Weekend in Houston but it is arguably the most highly recognized and celebrated weekend for Blacks, especially in Houston.Juneteenth is the weekend Texans remember and celebrate the abolishment and emancipation of black slaves in our state. The holiday is celebrated because although the Emancipation Proclamation was signed by President Lincoln in 1862 and went into effect on January 1, 1863, slaves in Texas did not get news of their freedom until June of 1865.Leaders in Houston have fought for Juneteenth to be a recognized and celebrated holiday in Texas and our community deserves for that celebration not to have to compete with the attention and coverage of the PRIDE Parade. The black community understands more than any community what it feels like to be discriminated against. We understand what it means to fight for equality. That is one common bond we share with the LGBT community. Many efforts, sacrifices, and lost lives of our ancestors have afforded the civil rights that you and I have today.It is my hope that you will not move the PRIDE parade to our historic Juneteenth celebration and respect that it is a weekend we want all people around Texas to reflect on our past and celebrate our present.I would not be opposed to speaking with you further on this topic in person and I look forward to your response.

I received a call at 1 PM from former Houston City Councilmember Jolanda Jones, who was alerted to the clueless decision of PRIDE Houston.  She is working to ensure that progressive African-American community leaders impress upon Mr. Quijano and his friends what they just set off could imperil the Houston Equal Rights Ordinance if it goes to a repeal vote during next year's city elections.


This is not a simple dispute about a parade date.   This is about cultural respect that sadly, the PRIDE Houston board has demonstrated it lacks.

So let them hear your thoughts at tomorrow's PRIDE Perspective meeting  at the Montrose Center 401 Branard St.    It starts at 7 PM, so let them know your thoughts on this issue.