Well, the big hate rally at Riggleworld is over. and it was wonderful to see the Houston LGBT community meet those multiple violations of the Ten Commandments by Riggle and his friends with an outpouring of action.

While his conservasheeple were buying t-shirts proclaiming they had the right to discriminate against gay peeps (and naw, you don't), we were busy collecting winter clothing and supplies for homeless LGBT youth and role modeling what real Christianity looks like.

Just to remind you peeps around the country.   Steve Riggle and his not so righteous flock don't represent the majority of Houstonians.   An overwhelming 75% of us favored passage of HERO and outnumbered the bussed in suburban haters when we testified in favor of it.  Neither do they represent the Houston clergy who testified in favor of the Houston Equal Rights Ordinance by a 2-1 margin over the hatemongering preachers.

The citizens of Houston, especially those of us who face discrimination every day, wanted this ordinance implemented back when it passed on May 28.  Unfortunately that's being prevented by a gaggle of loud and wrong ministers who want to impose their hatred on the rest of our city.

Speaking of loud and wrong preachers,  the kneegrow sellout ones of the Baptist Ministers Association of Houston and Vicinity trotted out another one to test another talking point lie.

Pastor Willie Davis laughingly tried to claim that 'HERO takes away the rights of heteros'. 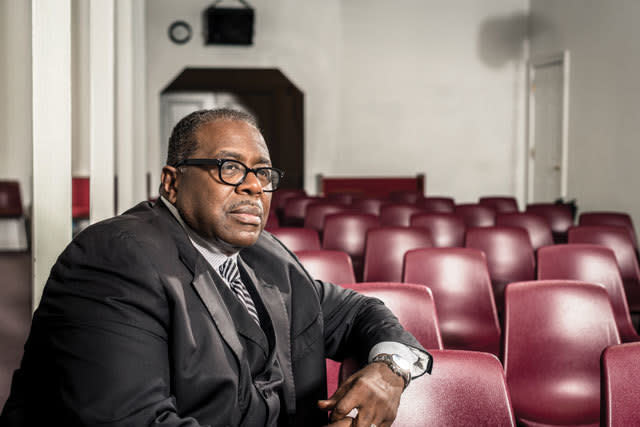 So where exactly Rev Davis, does it 'take away the rights of heteros'?    If you weren't so hellbent on selling out and cooning it up for the Harris County GOP,  you'd see that the Houston Equal Rights Ordinance EXPANDS the rights of heterosexuals like Judge Alexandra Smooths-Hogan, whose discrimination case was the catalyst for passing this much needed Houston human rights advancement.

And Rev Davis, since you went there, contrary to what your misguided ally Becky Riggle said, you so called Christians don't have a right to discriminate against LGBT people either based on your misguided interpretation of scripture.

And I still have to ask the question, what are the members of the Baptist Ministers Association of Houston And Vicinity getting from the conservative movement in exchange for being the sellout melanin laden faces of this HERO repeal effort so it has the appearance of looking less overwhelmingly white and Republican that even Stevie Wonder can see it already is?

And why are you doing the conservative movement and FOX Noise's dirty work for them?

The  other question I have to ask is this.   When will members of the local African-American media start asking the hard questions of the opponents I just asked?   When will they start calling these ministers out about opposing a long needed Houston human rights ordinance that benefits the ENTIRE African-American community?

And yeah, a message for my H-town peeps.   If you want human rights laws in Houston and in Texas, this is another TransGriot reminder to take your souls to the polls tomorrow if you haven't done so already.   Don't stop with Wendy and Leticia, hit those judicial races, too.   We need more fair minded judges on our Harris County benches instead of ideologically driven ones.

The fight to keep the HERO continues.