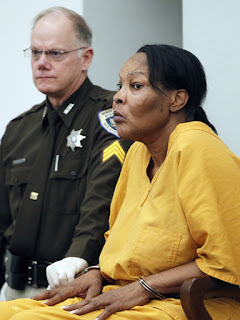 Silicone pumping is just not a transfeminine phenomenon any more.  Cis women are increasingly getting pumped, paying the money and in some cases traveling long distances to do so at the hands of transwomen getting paid to do the pumping..

And in some cases those cis women are paying the ultimate price for that silicone injection that goes wrong at the hands of these unlicensed pumpers.

While I'm not liking the total ineptitude of the Jackson, MS television stations to adhere to the AP Stylebook standards for reporting on transpeople, need to tell the stories and deal with the AP Stylebook violations later..

37 year old Karima Gordon of Atlanta served in the military and wanted to become a model.  She found 53 year old Tracey Lynn Garner after meeting someone on the Internet known as "Pebbles" and paying $200 for the pumping referral to Garner.

Gordon then drove to Mississippi in March with a friend to get pumped at Garner's house and became ill a few hours later.  Gordon endured a painful trip back to Atlanta where she died in a hospital a few days after the pumping procedure to enhance her buttocks.    The substance injected into Gordon was lab tested and according to authorities is alleged to be a counterfeit version of silicone.

Garner was arrested September 6, denied bail Tuesday and is in jail (guess which side) facing a depraved heart murder charge.  It's a legal term for an action that demonstrates a "callous disregard for human life" and results in death and carries a life sentence.  Mississippi Attorney General Jim Hood (D) said investigators were also looking for "Pebbles" the person who referred Gordon to Garner. 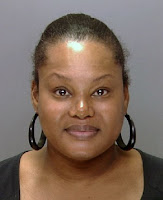 She was arrested in an unrelated case by Philadelphia police in March just as she was about to host another pumping party.   A 23 year old exotic dancer paid Windslowe $1000 in February to pump her, became seriously ill, was hospitalized and required intensive care..

Windslowe was being held on $750,000 bail in that February case on charges of aggravated assault and deceptive business practices before she was charged July 24 with third-degree murder in 20 year old Claudia Aderotimi's death, in addition to conspiracy, reckless endangerment, possessing an instrument of crime and unauthorized practice of medicine, aggravated assault and deceptive business practices. 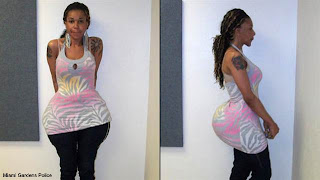 She was not only pumping other people, as you can see by the photo she'd done some work on herself.

Morris was arrested and charged November 18, 2011 with practicing medicine without a license with serious bodily injury after a procedure she performed on transwoman Rajindra "Rajee" Narinesingh's face went badly

Morris was arrested again a mere week later along with 40 year old co-defendant Corey Alexander Eubanks, after a second alleged pumping victim came forward. Like Narinesingh's cosmetic enhancements from Morris that went wrong, the alleged victim told Miami police that Morris had injected her buttocks with a mixture of cement, Fix-A-Flat and mineral oil. Morris and Eubanks were booked into Miami-Dade County jail.

In March 2012: Oneal Morris turned herself once again to face more charges of practicing medicine without a license and practicing medicine without a license resulting in serious injury, after three new victims, 41 year old Lournise Linton, 36 year old Ophelia Parker, and Tiffany Kennedy came forward to allege that in 2009 Morris, dressed as a nurse, gave them butt injections that left them disfigured.

Morris denied it in an interview that appeared on Entertainment Tonight for some reason, but she can't cavalierly slough off the current manslaughter charges she's facing in the wake of the March death of another one of her former pumping clients, 32 year old Shatarka Nuby. 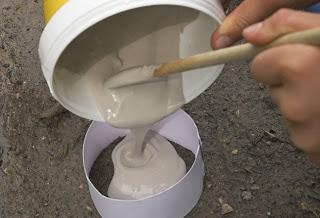 Nuby admitted to being treated by Morris prior to her death and paid hundreds of dollars to meet "Duchess' have her inject her Fix a Flat infused pumping cocktail into her breasts, thighs, hips and butt.

Nuby's death was attributed to "massive systemic silicone migration." The injection sites had turned black and the silicone in Nuby's body hardened.

One of the major reasons the pumpers keep doing it because they are making serious money off of the cis and trans women who want to enhance their looks by any means necessary.

Those three pumpers I profiled may be in jail, but there are plenty of others willing to take their place.
Posted by Monica Roberts at 10:00 AM