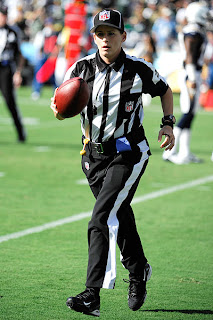 Because of the ongoing NFL officials lockout, an opportunity door was opened for others to get the chance to show what they could do at the professional officiating level.

Many of those locked out officials of the NFL Referees Association have decades of experience doing NFL and BCS collegiate football games, and it isn't easy to become one.

For those of you who had the opportunity to watch the St. Louis Rams-Detroit Lions game yesterday, you got to witness a little sports history in addition to the thrilling 27-23 game the Lions eventually pulled out.

The Tempe, AZ resident already made history last month when she became the first female official to work an NFL preseason game.  Eastin served as the line judge during the Green Bay Packers-San Diego Chargers game in San Diego as well.

MEAC officials declined comment on Eastin, and the NFL declined to make Eastin available for interviews during the week leading up to the historic game.   They also didn't allow media access to her following the Rams-Lions game, but did set up a conference call with her in August.

NFL Commissioner Roger Goodell said having Eastin on the field is a great opportunity for her and the league.  "She's well prepared for it, and I think she'll do terrific," Goodell said in an interview last month. "So we're excited about that"

"And there are more coming, by the way. We've been working along this path to try to properly train and prepare a female official, and now we have the opportunity."

Eastin said during last month's conference call, "I hope to show it really doesn't matter if you are male or female."