When The Election's In Doubt, GOP Goes Racist 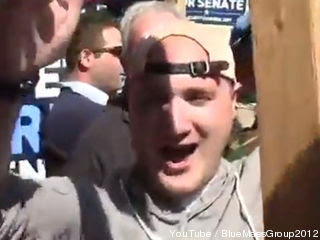 When the GOP starts losing in an election cycle, it's a given that since the only demographic they lead in any election cycle is white men, they will use tactics that attempt to stir up white male resentment and racism.

Hey, they've been falling for it over 150 years, and refined it with the Southern Strategy, so it works.

In the latest example of GOP racism for fun and electoral profit, we head to Massachusetts, where Sen. Scott Brown (R-MA) is now trailing in his race with Elizabeth Warren despite the massive cash being pumped into his coffers in this overwhelmingly blue state.

So what does he do to overcome that deficit?   Can you say race bait?    Thought you could.

But this is why Scott Brown and the people who back him are 'scurred' of her.

I find it arrogant, amazing (but not surprising) that almighty whitey Scott Brown seems to think that he can determine based on her appearance alone that Elizabeth Warren isn't Native American.

But that's par for the racist political course for GOP candidates.   When they're losing, they go negatively racist.to attempt to carry the electoral day.   Massachusetts voters, I hope you'll punish him for it.