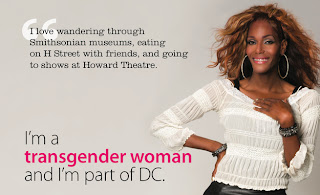 I talked about it last month when the Washington DC Office of Human Rights decided in reaction to the string of ugly anti-trans incidents and murders in the District to launch a first of a kind anti-trans discrimination campaign.

This first of several posters of DC trans and gender variant people who are spokespeople for this campaign were released.  The one featuring DC transwoman Kisha quotes her saying, "I love wandering through Smithsonian museums, eating on H Street with friends, and going to shows at Howard Theatre." 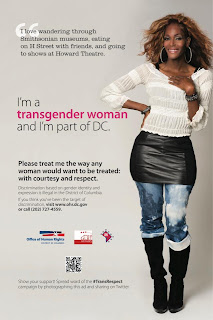 It mentions the tagline for the campaign: "I’m a transgender woman and I’m part of DC. Please treat me the way any woman would want to be treated: with courtesy and respect."

The poster then points out discrimination based on gender identity and expression is illegal in the District of Columbia under its Human Rights Law and provides a website and phone number (202) 727-4559 to get more information.or report anti-trans discrimination

The formal launch for the campaign happened last night with an event attended by DC Mayor Vincent Gray.

“This District is committed to ensuring that all people are protected from discrimination, and that includes discrimination against the transgender and gender-non-conforming communities,” said Mayor Gray. “This landmark campaign from the Office of Human Rights is an important piece of a larger effort by my administration to ensure all residents have equal access to employment, housing and public services and accommodations regardless of gender identity or expression.”

As for the spokesmodel's thoughts on the campaign, Kisha approves of the message and thinks it will have a positive effect on the city..

"I think it’s going to have a great impact," she said. "The fact that it is going to be right there in your face. People will see transgender people. They’re going through everyday life, everyday struggles — the same as straight people, rich people, everyone. Getting the message out there … is going to be great."

The rest of your transpeeps around the country think it's great, too.   Major props to the DC Office of Human Rights and DC Mayor Vincent Gray for making it happen.

This should be a national campaign! Bravo!