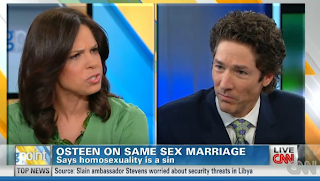 I'm beginning to love my CNN sister Soledad O'Brien again (yep, she's a Black Latina)    She has been on fire lately in terms of calling out and shutting down conservaignorance and stupidity, and now has moved on to calling out the bigots.

I'm not a fan of Joel Osteen and his Lakewood Church, especially after what happened between his wife and one of my former coworkers.

His Lakewood Church housed now in the former Compaq Center used to promote itself in H-town back in the day as the 'Oasis of Love'.  It's anything but that to trans and SGL people.

He recently showed up on Soledad O'Brien's show to plug his new book and when he made some homophobic comments to go with his book plug, Soledad and her guest Richard Socarides pounced.