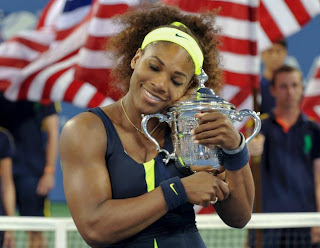 In her run to the final Serena Williams had rolled through this 2012 US open tournament without dropping a set and losing only a total of 19 games.

Serena was facing an opponent in 2012 Australian Open champ Victoria Azarenka she has a 9-1 record against including the Olympic tennis tournament semifinals last month.

Another US Open women's final blowout in the making, right?   Um, that's not quite how it played out.

When Little Sis breezed through the opening set in just 34 minutes it looked like the rout was on.   But unfortunately in this match Little Sis wasn't on her usual A+ game.  She was hitting more unforced errors (45) than she was hitting winners (44) and Azarenka was doing enough on her end to stay in the match and take the second set.

Yep, this US Open women's final was a three set affair for the first time since 1995.   World number one ranked Azarenka played well enough in this match to where she was up 5-3 in the third set and two points away from the US Open title.

But you don't win all those major titles Little Sis has without having some serious intestinal fortitude and having the ability to win matches when you're down.  Serena rallied back to win that game and the next three to win it 6-2, 2-6, 7-5 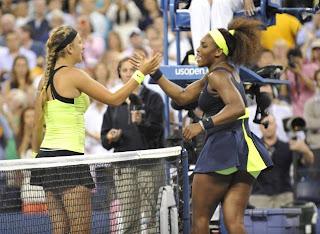 Little Sis captured her fourth US Open title, her first since 2008 and the 15th Grand Slam title of her career to put her in striking range of catching Martina Navratilova and Chris Evert who have both won 18 majors.

She capped an amazing summer of tennis which included the 2012 'Williams'-don singles and doubles titles, the gold medals in single and doubles at the London Games and now the US  Open singles title.  And did I mention Little Sis got handed a check for $1.9 million for her two weeks of work at Flushing Meadow?

She's the champ once again even if she wasn't playing her best tennis Sunday.  Deal with it, Williams sisters haters, the check and the trophy have her name on it and she's climbing up the tennis ranking charts once again.