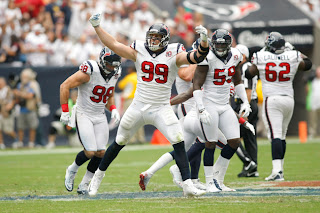 In yesterday's season opening game against the Miami Dolphins the Houston Texans had Arian Foster, Andre Johnson and Matt Schaub on the field in their liberty white uniforms for the first time since 2011.

My favorite NFL ballers are considered by some pundits as serious contenders to be the AFC representative for Super Bowl XLVII that will take place down I-10 east in New Orleans February 3.

The Texans players have embraced the heightened expectation of the media and long suffering Houston area NFL fans and adopted a 'Super Bowl or Bust' mantra.  They wanted to get the chase for Super Bowl XLVII and their second consecutive AFC South title off to a fast start in front of the 71,566 people at Reliant Stadium.

It was the second-largest crowd ever for a Texans home game (largest was last year's Pittsburgh game) and the sold out Reliant Stadium crowd got to enjoy the unveiling of the 2011 division championship banner.  But it was the Dolphins that looked more like the team that went to last year's AFC playoffs thanks to Ryan Tannehill, their rookie quarterback from Texas A&M. 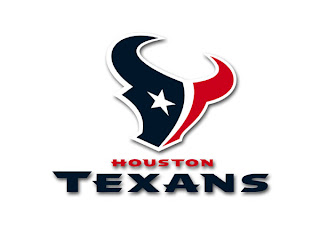 The Dolphins took an early 3-0 lead and stymied the Texans offense for most of the first quarter.  The Houston natives were getting restless over the missed tackles and dropped passes from our hometown NFL ballers and gave the Texans some boos for it..

Then the 'Bulls On Parade' Defense took over in the decisive second quarter.   Johnathan Joseph got the first of three interceptions off of Tannehill that led to the game tying 35 yard Shayne Graham field goal.

On the next series JJ Watt tipped a Tannehill pass to the waiting arms of Brian Cushing.  That led to a drive capped off by a 14 yard sprint by Arian Foster for the go ahead touchdown.

Watt then swatted Tannehill's next pass from scrimmage and cornerback Kareem Jackson came down with it at the Miami 27. Richard Marshall then was called for pass interference and Foster plowed into the end zone from the 1 yard line for his second touchdown of the day.
. 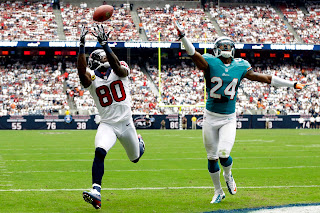 Tannehill handed off on Miami's next play from scrimmage, but that didn't work either because Glover Quin forced a Daniel Thomas fumble which Danieal Manning recovered at the Dolphins 31 with 28 seconds left before halftime. Schaub threw a pinpoint pass to the end zone to Andre Johnson, who made the acrobatic catch over the Dolphin defender for a 24-3 halftime lead.

After the 72 yard third period Thigpen punt return that chopped the lead to 24-10, the Texans got busy and added two more Graham field goals to secure the 30-10 win.   It also extended the Texans record against the Dolphins to a perfect 7-0 and made it the third consecutive year they've opened the NFL season with a win.

"It wasn't pretty," Schaub said. "Anyone in our locker room can tell you that we can play much better than we did today."   We fans know y'all can play better than this and I'm glad the Texans feel the same way. .

Next up is a trip to Jacksonville to play our first road and AFC South Division game of the young season with the Jaguars.  But getting better is mandatory because your schedule isn't going to get any easier.