The First 2012 Presidential Debate In One Week 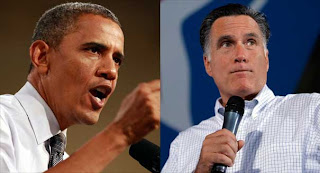 The debate will focus on domestic policy and be divided into six time segments of approximately 15 minutes each on topics to be selected by the moderator and announced several weeks before the debate.  The moderator will open each segment with a question, after which each candidate will have two minutes to respond. The moderator will use the balance of the time in the segment for a discussion of the topic.

This University of Denver debate will be moderated by Jim Lehrer (and I already vented along with the National Association Of Black Journalists and Univision about the lack of melanin in the Commission on Presidential Debates choices for those moderators and their weak azzed defense of it).

Yeah, still pissed about the fact there are no POC moderators for these debates and there hasn't been one since Carole Simpson did so 20 years ago.   But even she has commented about how little things have changed in 20 years.

But the best part is that in this UD debate or the two remaining ones Mitt won't be able to lie unchallenged.  This debate will also be occurring on the 20th anniversary of the marriage of the POTUS and FLOTUS (how cool is that?)

Also looking forward to the vice presidential one on October 11 between Vice President Joe Biden and Paul Ryan.

Already stocking up on the popcorn because this is going to be a make or break moment for the floundering Romney-Ryan campaign.  Either he steps it up or the Obama team can start planning their second inauguration ceremony on January 20 after the national handles its electoral business on November 6 and puts Romney out of his political misery.
Posted by Monica Roberts at 12:00 PM